Who Cares About The Golden Globes Anyway? 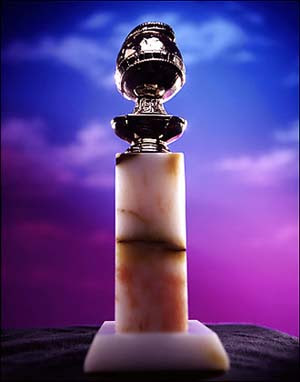 The checkout clerk was all a-twitter about the 67th annual Golden Globes.
"Who'll win best TV actor," she breathlessly asked me.
I couldn't care less. Really! This is the season where all sorts of ersatz awards shows spring forth.
I lost all respect fpr the Golden Globes the night Pia Zadora won one.
Think of it both Guy Madison and Zsa Zsa Gabor won awards for "achievement".
You see what I'm getting at.
I've met two of the members of the Hollywood Foreign Press Association over the years. One was a waiter at the Century Plaza hotel. The other was a taxi driver.
The networks boycotted the Globes for decades. Tapes of the awards would be bicycled from station to station and run weeks later late at night. For years CHCH used to pick them up.
Then Dick Clark Productions began producing the ceremony and turned it into an early warning system for the Oscars.
In fact there are so many of these awards things that the ratings of the Oscars have started to tank.
Having ranted I'll now say who should win as opposed to who will win.
Best TV drama and actor should be Jon Hamm in Mad Men. Best comedy series should be Glee.
Best comedy series actor? Alec Baldwin. Best series comedy actress should be Courtney Cox (everybody loves a comeback).
Best movie comedy will be It's Complicated. Best movie drama should be Inglorious Basterds.
Best movie drama actor should be George Clooney (Up In The Air). Best comedy movie actor should be Robert Downey Jr. (Sherlock Holmes).
Best movie drama actress should be Sandra Bullock (The Blind Side). Best movie comedy actress should be Meryl Streep (It's Complicated).
And best director should be James Cameron (Avatar).
Got all that.
I'm not advising you to boycott the festivities. Stars sit at tables and can be easily identified unlike the pompous Academy Awards. So the Globes are great for star gazers.
THE GOLDEN GLOBES ARE ON CTV AND NBC SUNDAY NIGHT AT 8. IT ONLY RUNS FOR THREE HOURS OF SPEECHIFYING.
Posted by james bawden at 11:49 PM