On CTV Action Is King 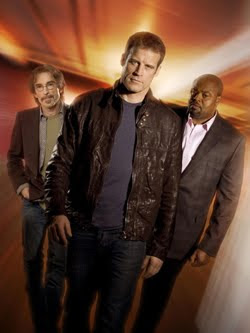 Prerelease is back as a force on Canadian TV.
It's the device whereby CTV is showing the new series Human Target two days earlier than the U.S. web Fox TV.
It seems like a new programming trick but at one time (say 25 seasons back) most Canadian networks preferred to prerelease their American shows based on the assumption Canadian viewers would want to catch them first on local stations.
When cable TV came in prereleasing was out and simulcasting in. Until now.
It actually makes sense for CTV to start off showing its new six part series Human Target before Fox.
The premiere is on Friday night at 10 before Fox runs the same episode Sunday night at 9.
Then a second episode will run in the usual CTV timeslot of Mondays at 10 with Fox running the same episode Wednesday nights at 9. Got that?
Human Target goes back to the days of cliffhangers. It stars an action hero named Christopher Chance (played by square jawed Mark Valley of Fringe).
There's more tension in the first hour than in any recent action flick I've seen but the question remains whether a weekly series can afford such expensive special effects.
A whole lot of money was spent on the opener. Will viewers be expecting this same quality every week?
The action begins with our buff hero strategically placing himself in front of a nut strapped with explosives who plans to blow himself up and everybody else around him.
The story then diverts to a speeding bullet train that flies by at 200 miles per hour but the breaks have been tampered with so a sprint through a tunnel will spark a mass derailment and a fireball to destroy all passengers..
If you think you've seen it all before, well you have. Human Target started out as a 1972 DC Action Comic and 20 years later was a short lived ABC TV series starring rocker Rick Springfield.
Fox is obviously test marketing this one to see if it can stand up to weekly scrutiny.
Co-starring with Valley as associates are Chi McBride (Pushing Daisies) and Jackie Earle Haley (Watchman) and in the first episode Vancouver native Emmanuelle Vaugier guest stars as the gal in distress on the train.
The action is never ending and one has to wonder how so much tension can be maintained on a weekly basis. You won't find much character development here. There's no time!
Valley rarely works up a sweat with all his heroics which are cagily pitched on a comic book level. And if you notice all the Canadians in the cast why that's only normal because the whole shebang was filmed in Vancouver.
Fox is obviously hoping after a slew of cerebral dramas it's time for a series that endlessly moves.
I kept thinking all this might really look impressive on a big theatrical screen.
However, I did keep watching right up to the end with the introduction of a big movie star name to frame the conclusion. I'm honor bound not to reveal his identity.
HUMAN TARGET PREMIERES ON CTV FRID. JAN. 15 AT 10 P.M. WITH THE FIRST REGULAR EPISODE ON CTV MOND. JAN. 18 AT 8 P.M.
FOX TV DEBUTS THE U.S. VERSION SUNDAY NIGHT AT 9 P.M. WITH THE FIRST REGULAR EPISODE ON WED. AT 9 P.M.
RATING: ***.
Posted by james bawden at 3:05 AM