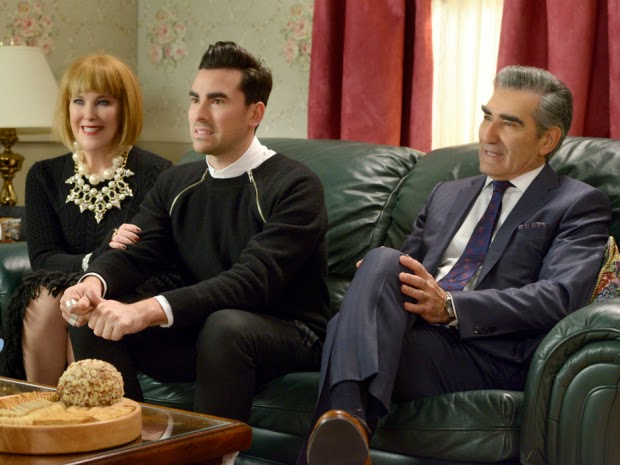 A very demure friend of mine in Ottawa told me she'd just have to phone me back.
"Right now I'm watching my favorite series Schitt's Creek," she said before hanging up.
And then there was the check out girl at Sobeys who said she adjusted her hours "So I can get home, make dinner and watch Schitt's Creek."
In a season where CBC-TV has been pounded by falling revenues from the federal government as well as the future loss of NHL hockey there's been one bright shining ray of hope.
Yes, It's Schitt's Creek.
You'll either love it or loathe it, there are no in between positions with this one.
Look, I go a long way back in the art of TV criticism.
And I know how hard it is to craft a local Canadian situation comedy.
I once sat through the taping of a new CBC sitcom titled Delilah and it was very, very painful let me tell you.
The audience actually trickled out before the taping was over.
CTV tried its darndest with Excuse My French (1974-76)  taped in Montreal but the frail little story faltered and quickly.Yes, there was King Of Kensington's success for CBC.
But it was followed by Hangin' In (1981-87)  which festered for six seasons despite the inspired presence of Lally Cadeau.
We were always told by CBC types that Canadian comedy could only thrive in sketch form --hence the huge success of RCAF, 4 On The Floor, Kids In The Hall and This Hour Has 22 Minutes.
So the huge success of Schitt's Creek is a sheer delight as far as I'm concerned.
It brought back to Canadian TV those great SCTV players Eugene Levy and Catherine O'Hara --aided by Eugen's equally gifted son Dan who is co-creator.
The premise is just plain wacky --Levy, O'Hara  and their two kids, formerly among the richest people in the land, lose everything and wind up in a seedy hotel in a run down town they just happen to own.
Hilarity ensues to put it mildly.
Dan Levy I first noticed in the hysterically funny MTV shows that followed The Hills where every nuance of greedy twentysomethings was parsed and examined.
He's completely funny here as the befuddled son David and Annie Murphy as the self centered daughter Alexis has gotten better every week.
Ratings have dwindled but that's because CBC lacks a bevy of other hit shows to "hammock" the new show until it gets its bearings.
I don't know how they got Chris Elliott into this as the very dim mayor but he works perfectly. Schitt's Creek is outstanding TV comedy because it creates a parallel universe and within that frame every character works  without overacting a bit.
The show can only get better with Season Two
THE FIRST SEASON FINALE OF SCHITT'S CREEK IS ON CBC-TV TUESDAY MARCH 31 AT 9 P.M.
MY RATING: ***1/2.

I would really like it if season two would start now please.

Watched the first 2 shows and was not overly impressed. BUT THEN......the show hit its stride and wouldn't miss it. Very funny, tongue in cheek. Love it.

Well, I was intrigued with the name, and I absolutely love Eugene Levy since his 3 mockumentaries with Christopher Guest, and I was sad it was in Canada, but then my grandkids helped me find it on Netflix - I've only seen the two seasons, but I watch them over and over; I'm housebound following a replacement hip surgery. I think they're better than Seinfeld and that has always been my top favorite. The humor, the timing, the cast, all are stellar - I hear thru the grapevine that they're working on Season 4- yay, just gotta catch up to Canada; I think I heard they'll release Season 3 in May 2018 here!