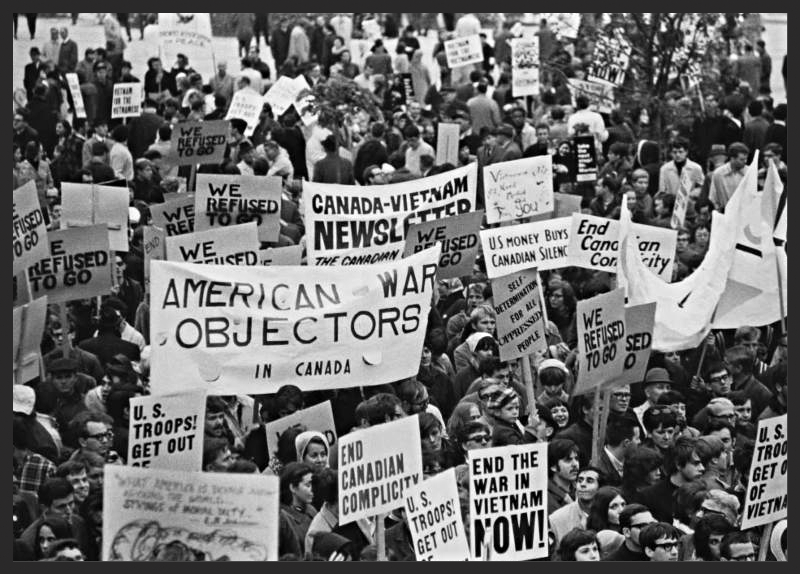 Way, way back in the Sixties when I was a lowly undergrad at the University of Toronto there was something called the Vietnam War raging half a world away.
But the conflict very definitely impinged upon U of T's usually serene campus.
There were angry demonstrations when Dow Chemicals came recruiting prospective graduates.
And mass demonstrations soon became a regular occurrence plus the definite possibility the university might even be shut down or the administrative buildings occupied.
All this turmoil is brilliantly captured in the latest must-see documentary from veteran filmmaker Andy Blicq in the riveting hour long history Vietnam: Canada's Shadow War
You can catch it on CBC-TV's Doc Zone Thursday March 26 at 9 p.m.
"I was amazed it hadn't already been done," Blicq says on the phone. "It had everything. But today there is amazement so many Canadians were caught up in this war in some way or another."
Blicq tells me there's a huge archive of newsreel footage that was just waiting to be explored.
He even shows clips from CBC reporters including a very young Peter Kent who interviewed more than 40 years later can still recall the difficulties in covering the war.
"We thought we were avoiding this war," says Blicq. "But it caught us up in its controversies."
I'm totally amazed --and I thought I knew something about Vietnam --at the number of young Canadian men who volunteered to fight.
"The figure is over 3,000," Blicq reports "although it may be a lot higher. One source says 12,000. Why did they do it? Some were there for the adventure. Others wanted to defeat communism. One boy who died over there was the son of a Canadian general.
"In addition to the inevitable casualties as well as the return of others who were broken in spirit."
Blicq thinks the time is just right to think back. "A re-assessment is underway in the U.S. I think there should be one in Canada, too."
One statistic Blicq discovered truly surprised me --he says of the draft resisters who came to Canada almost half were women of conscience.
He's gotten some great stuff with photographer Laura Jones who left the U.S. with her husband because of her conscience. Her meticulous photographic record of this community is utterly fascinating.
Blicq says CBC's archives are a treasure trove --the news reports have all been preserved. By contrast CTV's Michael Maclear told me a lot of footage shot on videotape had started to wattle and was no longer of broadcast quality.
"We think Canada wasn't involved but it was," Blicq says. Canada shared military information with the U.S. and Canadian factories produced war materials for use in Vietnam including deadly napalm gas.
"Prime minister Pearson clearly wanted to stay outside the expanding war," Blicq says. But in one confrontation at the Texas ranch of President Johnson Pearson was told in no uncertain terms to stop butting in.
I certainly remember when I started covering TV at the Hamilton Spectator in 1970 there were a number of "draft dodgers" on staff and they were intelligent and highly respected reporters.
Most chose to stay in Canada even after a mass presidential pardon and they've succeeded in many different walks of life.
When I tell Blicq I think he's amassed enough material for a dramatic miniseries he says "That's exactly what I was thinking."
There's a longer version I'm suggesting he could sell to the U.S. particularly PBS because this is a true story that skips across the border.
Made by Merit Motion Pictures: Vietnam, Canada's Shadow War is a virtually must-see experience.
VIETNAM: CANADA'S SHADOW WAR PREMIERES ON CBC-TV'S DOC ZONE THURSDAY MARCH 26 AT 9 P.M.
MY RATING: ****.

This 'Canada's Shadow War' documentary, is just one more 'American Story' posing falsely as a Canadian Story, but, it is the most important pivotal story of Canadian History. When over 125,000 American Vietnam War Draft Dodgers came to Canada in the 1960s and '70s, 50-40 years ago, was when Canada began to die. By the late 1950s, early '60s, Canada came very close to finally breaking free of American domination, but the invasion of the American Draft Dodgers put an end to that. Most American Draft Dodgers stayed in Canada and have always been Americans, they never became Canadians in their hearts and minds, they remain to this day loyal patriotic Americans. Naturally they formed organizations and networks amongst themselves in Canada. They became an "American Fifth Column" within Canadian society, undermining every effort and achievement Canadians attempted to build and forge a united Confederation of Canada, a sovereign nation Canada, True North Strong and Free. Most of those American Draft Dodgers got Canadian citizenship, later dual citizenship, with which they got jobs in every aspect of Canada, industry, education, police, governments, even the military, and Canada's spy institutions. Today there are over 3 million dual citizenship Americans living in Canada, plus a whole lot more without Canadian citizenship. Because of them, there are more American Flags flying over Canada than Canadian Flags. They hire fellow Americans instead of Canadians, contravening all requirements to hire Canadians who usually are better qualified. They source American suppliers and companies instead of Canadian. Politically they support and vote for everything that benefits the United States instead of Canada. They maintain higher trade barriers between Canadian Provinces than between Canada and the U.S. despite monumental efforts by some Canadians to change that. They keep Canada's population a consistent 10 percent of the U.S. population to ensure and secure Canada's natural resources for the U.S. and prevent Canada from ever growing big enough to threaten that. Any Canadian company that grows big enough to challenge them, gets taken over or destroyed from within and without, bought up, or driven into bankruptcy. And, they suppress and bury Canadian Unity, Identity, and Patriotism, and Canadian Stories; our History; Music; Television and Movies; News; Magazines; Books; Art; every aspect of Canadian Culture and Multi-culturalism. They bulldoze our historic buildings and sites to put up more condos and American businesses. They allow only that which mirrors American Culture, or any Canadian Cultural Creation that is of mediocre quality, or is claimed to be about Canada but has absolutely no relevance to Canada as a Canadian Story whatsoever, with predictable results. Those American Draft Dodgers invaded Canada, conquered from within, and Americanized Canada between the 1960s and the 1990s, till today there's barely anything left in Canada that is still Canadian. For all Canadians looking for who to blame for everything wrong about Canada, watch this 'Canada's Shadow War' documentary, and you'll finally know who rightly to blame. Americans, yes, but also Canadians for letting it happen.