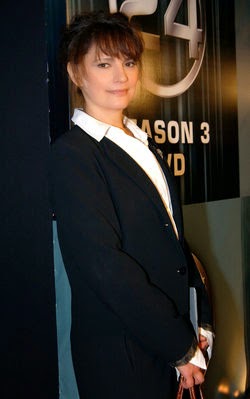 "It's funny, honey, but I've been in this crazy business for 30 years and here I am now in the lead!"
And Alberta Watson let out with a cannonading cackle that hushed all spectators.
There I was in a church basement on Roncesvalles Avenue interviewing Watson, her co-star Peter Outerbridge and producer Bernie Zukderman who were shooting the pilot for a new CBC-TV series called Chasing Cain.
It was the summer of 2002 and the first cut of the TV movie showed a sharpness and story line bound to succeed --except CBC pulled the plug solely for budgetary reasons and Alberta Watson never got her crack at top TV stardom.
I'm thinking of Alberta who has passed aged 60 days of lymphoma --I met her all over the place over the years.
"We go all the way back to In Praise Of Older Women (1969)"  I told her that day in 2002.
"Not that I was one of the older women," she laughed.
Indeed, she was the one lover who was a near contemporary of the hero played by Tom Berenger.
Just for the record his older conquests included Karen Black, Susan Strasberg, Helen Shaver and Marilyn Lightstone
But In Praise failed to make Watson hot in her own country and like so many others she drifted to L.A.guesting on such shows as Hill Street Blues, Law & Order, The Equalizer  as well as miniseries like Kane And Abel (shot back in T.O.).
She did get co-starring duty in the 1987-88 series Buck James (well cast as Dr. Rebecca Meyer).
One big break came in the 1994 independent movie Spanking The Money as the woman who sleeps with her own son (played by Jeremy Davies).
"It was considered very naught. People were always asking me about it and assuring me they'd only heard about it not actually watched it.
She returned to T.O. in 1997 for the series La Femme Nikita well cast as the spy agency honcho Madeleine.
The sight of Watson all dolled up in a pink Chanel suit and matching high heels proved just how sexy she could be.
And she was back for nine more episodes in the instant TV remake (2011-12) with Madeleine now a powerful U.S. Senator.
Watson also shone as a regular on The Newsroom (2004), Show Me Yours (2004), 24 (2004-05), At The Hotel (2006), Angela's Eyes (2006) and The Border (2008).
But it was the irony of Chasing Cain slipping away that floored her.
First diagnosed with lymphoma in 1998 she asked me to keep it secret or she'd lose out on jobs and I was happy to oblige.
In person she remained drop dead gorgeous, hilarious when discussing the start of the Canadian TV industry or when she instructed the Star photographer during one shoot how to light her eyes.
When he chose another less than flattering shot she phoned me at The Toronto Star and raged "The next time he'll have to shoot me through linoleum!"
Then she cackled her wonderful way and hung up.
I remember her best quote to me: "I'm a working Canadian TV actress and there are few of us around at the best of times."
And already I'm missing her.