What If...Veronica Mars Became A Zombie? 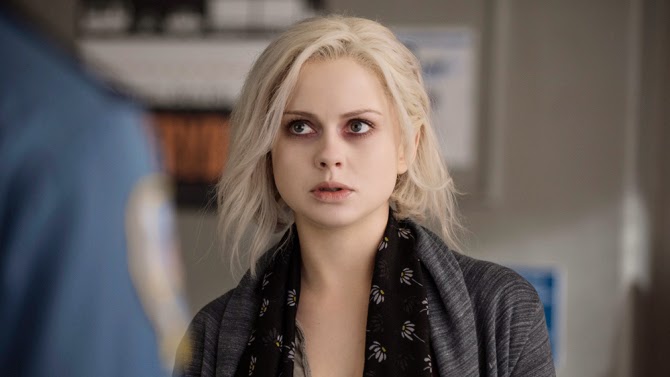 For years now I've been demanding equal treatment for TV zombies.
Various vampire TV series star a lot of male beauties but women simply do not get fair treatment.
And then along comes the new series iZombie starring sometimes beautiful Rose McIver.
You can catch it starting Wednesday on the new video streaming service shomi (a joint venture between Rogers and Shaw).
For more information click to shomi.com for a free subscription period.
It's absolutely no surprise that the creator of this adaptation of the Vertigo comic is Rob Thomas who once served the same purpose on Veronica Mars.
In fact McIver looks so Veronicaesque this one might be retitled "Veronica Mars Becomes A Zombie".
We first meet our heroine "Liv" "when she is relatively normal --that is if being 25, great looking and a rising medical resident can be deemed average.
She has everything going for her including a handsome if slightly boring fiancee (Robert Buckley)) who convinces her to go to a medical students party just to prove she's one of the folks.
Like there's this zombie attack that leaves most of the students dead except for our Liv who springs up and discovers she's been turned into a zombie.
Most of the time she simply staggers around looking out of it but then there's feeding time and nothing but munching on a newly dead human's brain can quench her appetite.
But when she nibbles away she also consumes the memory of the dead person she's been chomping on.
The first episode artfully sets up her predicament.
Like she's new to the zombie game so what better reference is there than the antique horror flick Night Of The Living Dead which she watches over and over.
Her life saving career now gone, she opts for a job in the mortuary and becomes the confidante of  bright, young detective  Clive Babineaux (Malcolm Goodwin) --he doesn't seem to "get" her altered state but how can he remain ignorant for long?
Gag lines resonate such as "You're not dead, you're undead."
Or "Eating brains sucks beyond words." I just bet it does.
A darker story starring David Anders as a sort of mentor zombie is being introduced throughout the first four episodes. That's all I'll say on this matter.
The often wry and satirical plot takes the same tone as the original comic which was written by Chris Roberson and drawn by Michael Allred.
The first person perspective is a real plus and it's definitely interesting we see Liv as a real, caring doctor before she morphs into the zombie girl who by the way still wants to help people.
And she doesn't have time over the long haul to feel sorry for herself.
She begins a very strange collaboration with morgue co-worker Dr. Ravi Chakrabarti (Rahul Kohli) that will be developed in future episodes.
I know it sounds strange but iZombie is really a delicate balancing act --some laughs, some chills.
Whole scenes are rather charming, the heroine certainly is different although in some scenes she looks almost pretty but in other situations spots a complexion filled with holes.
Liv simply determines to get on with helping people and she refuses to crumble away.
I rather like that prescription of surviving her state of "undeadliness".
IZOMBIE PREMIERES ON SHOMI ON WEDNESDAY MARCH 18.
MY RATING: ***1/2.