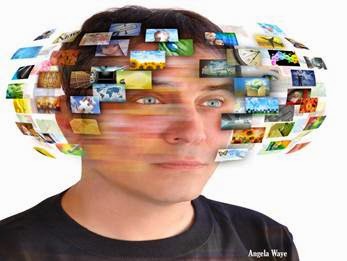 I think it was last summer that I suddenly realized my insular little world was fast changing.
There I was walking in my neighborhood one afternoon when I met up with an old friend who said she'd just sent her teenaged daughter to a special camp to break her twitter addiction.
Seems the teen was notching 3,000 tweets and twitters a month even as her grades plunged accordingly.
Then I saw a nun at St. Michael's College out on the lawn reading her tablet.
And bookstores I'd been frequenting for decades started disappearing.
If only I had been able to see John Freed's new documentary Deluged By Data at that time I wouldn't have been in such a funk.
You can catch it on CBC-TV's Doc Zone Thursday March 12 at 9 p.m.
Freed's brilliant take on digital modernity is a must-see for all of us who still watch network TV on occasion, purchase real newspapers or even use an old fashioned land line telephoner.
In fact it's quite ironical Deluged By Data is running on Doc Zone because CBC sources keep saying that delightfully old fashioned documentary series may be axed as CBC audiences continue to dwindle.
Freed accomplishes everything stylishly with a lot sarcasm and wit.
And he has definitely it proved to me that as far as The Brave New World of Digital existence goes I'd rather remain a Luddite.
Freed's round up of victims of digitality might be described as cases of too much, too soon.
'He interviews quite brilliant, young people who realized they were suffering from digital overload.
Some even managed to break free but the average digital addict might need some help along the way.
The first images show us what is happening out there: there's a solemn Papal procession featuring the late great Pope John Pasul II and the adoring crowds are content to watch and soak it all in.
Fast cut to today's Pope Francis in the same procession arc and everyone in the crowd seems to be taking selfies or getting the big shots on their cell phones.
We visit with data expert Patty Smith whose job it is to winnow down all those images to the essentials.
One guy has 30,000 images and can never find the ones he truly needs.
Vacationers would come back from a Caribbean idyl with maybe 30 pictures --now they have thousands and they're so busy getting the shots they forgot to stop and and appreciate the scenery.One subject tracks his eczema with a home device.
Futurist  Stephane Marceau predicts that clothing of the future will some complete with darta collecting inserts.
A few weeks ago I searched on the web for Angela Lansbury tickets at Toronto's Princess of Wales theater.
I didn't buy tickets at that time but every other newspaper site I now reach flashes Lansbury ticket offers at me.
CBC radio host Nora Young explains how sharing of data on such a wide scale is frankly scary.
Freed even tracks down a former Google executive Daniel Sieberg who was so into living a data rich life that he missed important family events.
He now describes himself as a recovering tech addict and his journey is fascinating.
Freed also visits Camp Grounded where victims of data burnout search for their basic humanity. And he's found twitter addict  Lolly who has quit stone cold because she hardly knew any of the people who were constantly tweeting her.
Freed who soars as the Montreal Gazette's humor writer wrote the novel that became the 1981 movie Ticket To Heaven. His last documentary was Life Below Zero (2012).
I like Deluged By Data but since I have never learned to twitter or tweet this is the only way I can alert potential viewers./
DELUGED BY DATA PREMIERES ON CBC-TV'S DOC ZONE THURSDAY MARCH 12 AT 9 P.M.