The Antibiotic Hunters: Must See TV 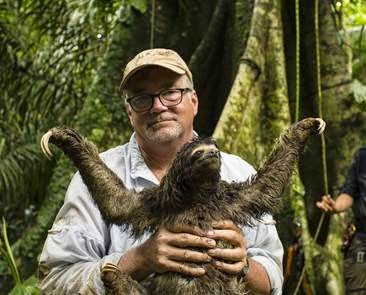 I just had to preview the new CBC documentary The Antibiotic Hunters because I'd recently come down with a suspected case of C Difficile after a well meaning  ER doctor doused me with competing antibiotics.
But what a relief!
Because I discovered this hour from Vancouver documentary film maker Bruce Mohun is pretty terrific.
I naively thought it would be a bunch of talking heads but the visuals are amazing.
You can catch the premiere on CBC-TV's The Nature Of Things Thursday March 5 at 8 p.m.
"We started by selling the idea to CBC's The Nature Of Things," Mohun explained on the phone to me. "But, yeah, we thought the visuals might be the challenging part."
Instead Mohun's travels all over the map make the hour must see TV.
"We're at the end of the great age of antibiotics," Mohun says. "They have been over prescribed and unlike other drugs they are no longer potent if used over long periods.
"Scientists have warned us that new drug resistant strains of infections may pounce and we would have nothing to counter.
"So there's a desperate race to find new antibiotics and that's what I tried to look at."
Finding new antibiotics out there is a case of venturing into places untouched by human habitation.
In one segment Mohun and crew wiggle into a tiny cave in the B.C. forest where the textured walls may indeed produce suitable material.
"The caves have been there for thousands of years --how they have survived and grown is tremendously important.
"How tough was it to film in a tiny cave? With one hand I'm holding the light to illuminate the scientist, with the other I'm trying to stay upright."
Another site is a remote jungle island off the coast of Panama.
"It used to be a penal colony but most of the island remains dense, unexplored bush."
That's where Mohun meets up with the amiable three-toed sloth who carries unique sources of algae growing on her back --it might be another key to a new antibiotic find.
And there's a visit to an alligator farm in Florida --the blood of alligators holds other keys as does the saliva of immense Komodo dragons..
Mohun ties this all in to the recent work of Canadian scientist and some human interest stories such as the young mom who had to have a fecal transplant to conquer her C Difficile problem.
"The problem is antibiotics are everywhere --in farm animals in Canada although the practice has been banned by European Union countries.
Other recent Mohun documentaries I've admired: The Downside Of High and The Allergy Fix.
Says Mohun "We show some other new alternatives such as the low dosage of silver mixed with the antibiotic vancomycin and what is called 'Phage therapy' used for decades in Eastern Europe where viruses called bacteriophages attack the super bugs.''
The final result is a cutting edge real story that is one of TNOT's best hours of the season so far.
THE ANTIBIOTIC HUNTERS PREMIERES ON CBC-TV'S THE NATURE OF THINGS THURSDAY MARCH 5 AT 8 P.M.
MY RATING: ****.