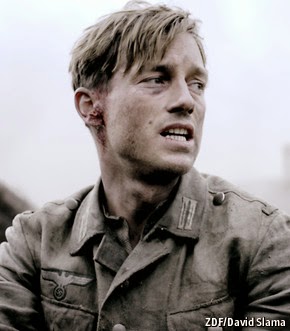 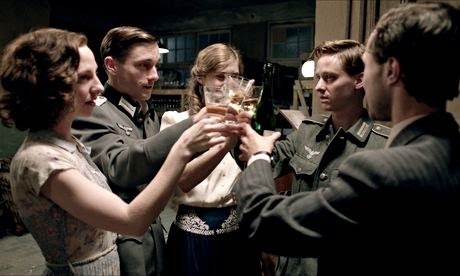 When TV first popped up some sixty years ago it was hailed as a sort of  widow on the world.
In recent years it's been a window on dismal and mediocre American series.
The rest of the world gets decidedly ignored.
Even so it's a shock to remember the last great German TV miniseries I watched was Heimat way back in 1984.
In fact even BBC which used to promote such fare hasn't had a foreign language show on since 2001.
So welcome to Generation War which recently won an International Emmy in the miniseries category --the three parter debuts Wednesday December 3 at 10 p.m. on Super Channel.
First hurdle for most Canadian viewers will be the subtitles which I submit are far preferable to ghastly dubbing.
Generation War is a sprawling account of five friends in Berlin starting out in 1941.
It is beautifully acted and gripping in its depiction of war on the eastern front, photographed in mostly  sepia and filled with challenging moments.
The three parter tends to romanticize some events while trying to portray these five as often misguided but certainly not hated Nazis.
The anti-hero Wilhelm Winter (Volker Bruch)  has a close Jewish friend back in Berlin whom the gang truly love.
But left alone on the cold and cruel Russian front and his sense of being a better man quickly crumbles.
One devastating scene shows German officers forcing Russian partisans to run across a marsh which they know has been mined --we see and hear the explosions in the distance and witness the look of horror on Wilhelm's face.
Then there is, the pert volunteer nurse Charlotte (Miriam Stein) , who makes friends with a Ukrainian prisoner of war who she suspects of being Jewish.
The Gestapo are informed and drag the pathetic prisoner off to certain torture and death.
Also depicted is Greta (Katherina Schuttler), a talented pop singer who wants to be the next Dietrich but she is in love with Jewish Viktor (Ludwig Trepte) and she might be betrayed at any time and lose her position in society.
I think I understand what is going on here --the reality of all-out war forced most Germans to do things they would rather have avoided. This may be true but its a sort of historical plea bargain.
The Wehrmacht are shown time and time again as the ones committing atrocities.
A little Jewish girl who Wilhelm wants to save is cruelly shot in the back of the head by an army officer who dares Wilhelm to do something (and he does nothing).
I understand one point of the miniseries' popularity in Germany was to portray average people as victims just like the peoples who were being prosecuted.
But I think this is the wrong way to go and some scenes do not ring as true.
When brother Friedrich Winter  (Tom Schilling) refuses to put out his cigaret while on guard duty in a trench that flame is spotted by Russian bombers who dive bomb the encampment.
The survivors treat Friedrich cruelly but surely in such a system he would have been shot on the spot?
In fact what emerges is a German take on The Winds Of War --a lot of individuals getting caught up in an historical storm over which they have no control.
Technical aspects are very well handled and the young actors are sensitive and well cast.
Obviously the lavish production was made for a younger German generation for whom the war is a fading memories of parents and grandparents.
The five main characters get swept along even though they know by 1943 that the war is lost.
But this war and the holocaust can never really be over for Germany. Never.
GENERATION WAR PREMIERES ON SUPER CHANNEL WEDNESDAY DECEMBER 3 AT 10 P.M.
MY RATING: ****.