A Brilliant TV Plea For Justice 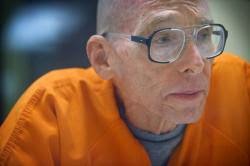 Tommy Ziegler has spent more than half his life in prison, convicted of murders he could not have possibly committed.
He stares out at us in his orange prison jump suit. The big glasses make him seem even more frail and lost.
Now 68 Tommy has spent more than half his life in a Florida jail for killing his wife and her parents.
But forensic experts have been saying for decades he could not have done it.
Now there's renewed interest to free Zeigler based on a brilliant new Canadian documentary titled A Question Of Innocence.
It runs on Investigation Discovery channel Sunday night at 8 and is a must see for anyone interested in truth and justice.
Zeigler was convicted of the Christmas Eve murders in 1975 and has been fighting for a fair trail ever since.
But he has exhausted virtually every means of appeal and the Republican governor of Florida, Rick Scott, just re-elected has a fast track program  titled "Death Ready"to speed inmates of Death Row to their executions.
"It was the kind of story I've always been interested in," says veteran producer Christian Bruyere.
"I started investigating in 2011 and all the pieces effortlessly fell into place.
" I first met Tommy on his 67th birthday,a kind, sweet guy, resigned to his fate, but not the mass killer depicted by the state".
Bruyere's company Mystique Films is renowned for these type of films going right  the 2001 TV movie scorn which copped an Emmy as Best TV picture.
I remember 2005's Children Of The Tsunami, a look at Sri Lankan orphans.
His latest CBC documentary Naked garnered the highest audience of any one hour documentary on CBC Newsworld.
"Obviously during the recent Florida gubernatorial race I was hoping Scott was not going to make it but he squeaked through. It just makes it that little bit harder."
The motives for killing Zeigler family members has never been clearly stated.
"Even today he still loves his wife," Bruyere says.
"He loved walking the dog with her. They were in the furniture store late that night to pick out a gift for her visiting parents.
"State made much of the insurance policies taken out on Mrs. Ziegler's life but that was legally necessary as she was joining the firm as a partner."
Bruyere approaches the evidence already gathered and lays it out for us --he meticulously reconstructs  everything that is known about that fateful night.
One big question is: who was the other man whose corpse was also found that night --he had the DNA of another man's blood also on his jersey.
"The fourth victim --who was he? Was he perhaps the perpetrator , the hired killer along with another man? "
And then there's the conduct of Judge Whitehead during the trial --he and Zeigler had previously clashed and on every piece of evidence the judge ruled against the defense.
Bruyere advances a dazzling theory who had ordered the deaths --watch the hour and see if you agree with me that this theory fits perfectly.
Superb editing and the inclusion of well staged dramatic bits makes this a compelling hour, a very model of how to present evidence.
I couldn't turn away and neither will you.
Instead I now firmly believe in Tommy Zeigler's innocence.
A QUESTION OF INNOCENCE PREMIERES ON INVESTIGATION DISCOVERY SUNDAY NOVEMBER 9 AT 8 P.M.
MY RATING: ****.