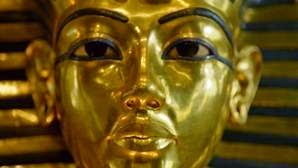 It's only taken 3,000 years but the secrets of the boy pharaoh King Tut have finally been unmasked.
And as revealed in a new TV documentary it's not a pretty sight.
Catch it all in the new Discovery special King Tut UnMasked which revs up Sunday November 9 at 8 p.m.
After an hour of previewing this one I felt right sorry for the troubled teen who hobbled around with a club foot --he also had a cleft palate.
Basically this is an hour long virtual autopsy performed in high tech style by Egyptian antiquarian expert Dr. Zahi Hawass. assisted by surgeon Hutan Ashrafian and radiologist Dr. Ashraf Selim.
Contributing historical nuggets is Canadian Egyptologist Gayle Gibson.
First up there are complicated procedures to identify his father and mother. Try extracting DNA from such mummified remains!
It can only be done these days and the results are startling.
Of course we know all about the Curse of King Tut --his mummy was discovered in 1922 by British archeologist Dr. Howard Cain in the Valley of the Kings in 1922.
Dr. Carter's benefactor Lord Carnaveron died suddenly after the tomb was opened leading to all sorts of story.
First Hawass must establish that deceased pharaoh Akhenaten was actually Tut's father and that is done.
But the surprise here is Tut's mother was a sister of Akhenaten --her mummy is discovered. Nefretri was Akhenaten's official consort.
But after all at the age of 10 Tut married his half sister. Incest ran rampant in the royal family because pharaohs were believed descended from the gods.
Inbreeding destroyed the young boy's health --there are over 100 cames left for him in his tomb to help him in the after life.
All this is played out as an engulfing mystery.
One thing is debunked: the hole at the back of the head was probably made by Carver in trying to dislodge the golden mask from the mummy.
This of course means the assassination theory of his death is not true.
More intriguing is a leg fracture that may have resulted from malaria and caused sudden death.
The tomb was so hastily constructed the paintings were made while the plaster was still moist causing mold to form.
What evolves is an intriguing guide in ancient Egyptian history with visits to the Valley of the Kings and the Sphinx.
Tut became pharaoh aged just 10 in 1333 B.C. and he died just nine years later, the last of his dynasty.
KING TUT UNMASKED PREMIERES ON DISCOVERY SUNDAY NOVEMBER 9 AT 8 P.M.
MY RATING: ****.