The Secret Life Of Pigeons: Timely And Moving 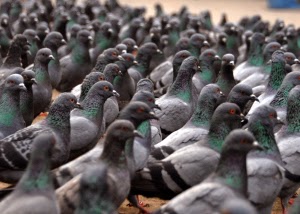 I previewed a brilliant new CBC documentary the other day and then I rushed out to feed the pigeons at the parkette near where I live.
I swear there is a connection!
The CBC documentary I watched  titled The Secret Life Of Pigeons is director-writer Scott Harper's often moving take on the plight of urban pigeons.
Of course I feed the birds in my area when I can remember to which is often not enough during these chilly November days.
Harper's take is quite compelling. I know a lot of my neighbors think pigeons are just nuisances and certainly among the dirtiest of urban critters out there.
"Winged rodents!" is one of the nicer comments I've heard recently.
Not so says Harper on the telephone.
"They're just about the smartest animal around --look at the way they can find their way back home from distant places."
Indeed in some experiments we watch scientists try to figure out the amazing homing tendencies of these birds.
Is it scent? Do they use familiar landmarks or fly by the sun and the stars?
I'm told it's a TV first but a miniaturized camera is trapped onto the head of a pigeon --don't worry the animal doesn't suffer --and off we go getting a bird's eye view of how it travels home!
I never knew these were the first animals to be domesticated by early man --there are references to these birds right back to ancient Egypt.
"They certainly intrigued me," Harper says. "There's the public image and then reality. They form tight knit families although the males are not always monogamous.
Sounds like some human families I know.
"But both parents help in the baby rearing."
We see the kinds of shelters they prefer in the urban landscape to escape from predators including hawks.
Says Harper: "Their lives are very short, they frequently starve to death in brutal winters. They manage to mate and bring up the next generation and then they die."
Harper tells me today's city pigeons are the ancestors of domesticated pigeons brought over by immigrants in the nineteenth century.
Somehow the genteel European traditions of breeding them got challenged in the tough environment of the modern city.
"The birds either escaped or were deliberately set free and then adapted fairly quickly to the harsh new realities.
Here's where I must declare a potential conflict of interest.
Relatives of mine have bred and shown pigeons over the years --my favorite has always been the fan tail which Harper also likes.
I'm confessing all this because I really liked the section on the wonderful world of pigeon fanciers who take their birds to fairs and even release them in pigeon races.
One thing Harper stays clear of and I must thank him for that: a certain European craving for pigeon pie and like delicacies is never mentioned here.
This pigeon profile is well scheduled --just before the wintry bursts which deprive all outdoor birds of food supplies.
One Quebec professor shows us how pigeons evenly distribute themselves over a city so there are never too many pigeons to feed at any one park.
This one is tightly edited and cleverly shot and I tell Harper he could make a big sale to U.S. TV with the addition of a few shots of pigeons in Central Park.
And he says he's already working on it.
But The Secret Life Of Pigeons will have really succeeded if it gets you to cut up your stale dated bread and feed it to man's best friend in the winged category.
THE SECRET LIFE OF PIGEONS DEBUTS ON CBC-TV'S THE NATURE OF THINGS THURSDAY NOVEMBER 20 AT 8 P.M.
MY RATING: ***1/2.