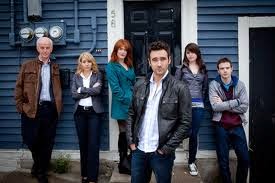 It was supposed to be comeback day for the beleagured CBC as the network threw itself a party at the network's Front. St. headquarters in Toronto.
the occasion? To celebrate its upcoming season beginning in September.
But right off the top one of CBC's bona fide stars Allan Hawco announced to a startled bunch of TV critics that he's voluntarily ending his series Republic Of Doyle after one more season of just 10 episodes.
I could hear the gasp from the audience. Republic Of Doyle is one of CBC-TV's true ratings kings but Hawco assured me he's leaving voluntarily and wants to go out on a high note.
"No coasting," he told me. Production begins next week in St. John's Newfoundland with the final day's filming set for September.
And just to prove his point he came with a gaggle of co-stars who seemed none too happy at the announcement: Kristin Pellerin, Lynda Boyd, Sean McGinley, Mark O'Brien and Martha Bernard.
"We're back on Wednesdays which is our comfort zone. On Sundays we had to battle all those big awards shows. I just feel this is the right time."
On other CBC fronts incoming programming chief Heather Conway was decidedly upbeat about the product on both her TV and radio services.
In fact she got out all the big guns.
Both Peter Mansbridge and Rick Mercer had been notable for their absences in recent years but both showed up to rally the troops.
Indeed every star from CBC Radio One and Two was up on the podium and there was a full compliment of CBC News stars.
There's every indication the network is starting to fight back but resources are limited. NHL hockey continues on CBC-TV this fall but CBC wont be getting any of the lush revenue from it.
Conway also announced several new projects to rally the troops. there's the Book Of Negroes based on the best seller by Lawrence Hill and starring Cuba Goosing Jr. and Louis Gossett Jr.
Strange Empire is a dark western about a western town where towns folk keep disappearing.
Camp X looks at a Canadian camp during World war II where spies were trained --Flashpoint creators stephanie Morgenstern and Mark Ellis are making it.
Private's Passage is an animated yarn about smugglers produced by and starring Donald Sutherland.
Then there's the bizarre new comedy turn Schitt's Creek starring Eugene and Dan Levy and starring Catherine O'Hara.
Conway took over from Kristen Stewart who jumped to Twitter Canada --here is the first schedule to show her branding.
Canada's Smartest Person is back for nine episodes and Johnny Harris takes us to Of All Places as he unearths small town humor.
CBC has bought the BBC series The Honorable Woman starring Maggie Gyllenhaal and an Australian series Secrets And Lies.
Returning series include a recast Dragon's Den, Mr. D, Murdoch Mysteries, Heartland, Rick Mercer and This Hour Has 22 Minutes.
There doesn't seem to be any replacement for George Stroumboiulopoulods.
Cancelled shows include Rick James and the David Sutcliffe police drama Cracked.
Hawco told me he's "open" to suggestions about making Doyle into a TV movie or two. "A theatrical movie would really be something else again."