I Remember Ann B. Davis 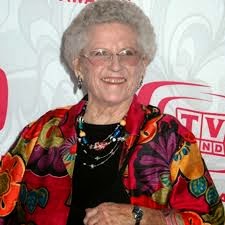 One of the first TV sets I ever visited as the kid TV critic for The Hamilton Spectator in 1971 was Mission: Impossible shot in Hollywood..
It had been arranged in advance that I'd watch the filming and then interview star Peter Graves.
But it was there that I suddenly bumped into Ann B. Davis.
Wait! I know you are going to say "But wasn't she the co-star of The Brady Bunch?" Yes, true, and if you look at her credits there's nary a mention of  Mission: Impossible.
Well, Graves was away in makeup when I arrived and the complicated scene being filmed involved opening a gigantic mummy tomb.
There was a rehearsal and then co-star Greg Morris manfully pried open the sarcophagus.
And out walked Ann B. Davis.
"Hi gang" she blurted out as the director bawled cut and had a fit.
And Ann B. Davis simply walked out of the scene and back to her own set.
Because she worked next door on the Paramount lot making The Brady Bunch.
Comedy great Davis won two Emmy awards as the lovable single ssecretary Schultzy Schultz on the Bob Cummings which ran from 1955 through 1959.
"She could get a laugh just out of saying hello," star Bob Cummings once complained to me. " I had to stifle laughter every time she looked at me."
When I met Davis that day I followed her to the stage door and got a few quotes.
"Doing MI must be easy compared to the Bradss," she said. "Every day our kids have to get schooling. So we're all a bit rambunctious as the clock ticks away."
After the initial series was cancelled in 1994 Davis continued to appear on The Brady Bunch Variety Hour (1976-77), The Brady Brides (1981), A Very Brady Christmas (1988) and The Bradys (1990) and the 1995 big-screen spoof The Brady Bunch Movie.
In the late 1970s she chose a quieter life as part of a religious community where she said she had found peace of mind.
I later caught her on TV commercials using her maid character to banish kitchen grime and grease.
She had a bad fall last week hitting her head and never regaining consciousness.
She was 88.
But I still remember her from her burst of hilarity of Mission Impossible.
A few minutes later Peter Graves appeared and we had a good hour's talk.
About Davis's chuckling cameo he shrugged and said "We can't keep her away."