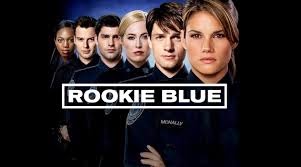 Normally Canadian TV dramas have short and un-sweet shelf lives.
That's because of the economics of the business --these shows must service two masters: TV executives both in Canada and the participating U.S. network.
It makes for a formula for chaos as witness the fine summer series Combat Hospital, a hit on Global but a ratings loser on U.S. TV.
And so it got cancelled after one summer.
But Rookie Blue which returns Monday night at 10 on Global was luckier.
I once spent a few hours with the canny executive producer Ilana Frank who said her series had ABC executives rooting for it from the get go.
By the way Frank also made the sturdy series The Eleventh Hour which despite the talents of Sonja Smits and John Neville never even got aU.S. network sale and floundered after two seasons on CTV.
Rookie Blue looks at a bunch of young beat cops who, alas, are hardly rookies five seasons later.
The show is a walking advertisement for a group of young and photogenic Canadian actors including Missy Peregrym, Ben Bass and Greg Smith.
It's well made, shot mostly in and around Toronto and one of a number of Canadian procedurals which also play on the American networks --think Motive (shot in Vancouver).
Last summer season ended with two principals taking bullets---how's that for a hangover.
I like the show, watch it all the time but it's hardly on my list of "must see" TV series and never pretends to be anything else but a well made procedural.
A final order of 22 episodes means the series will last this summer and next. ABC obviously likes the show but doesn't feel it is strong enough to run during the regular season.
So the question is: are there any Canadian shows out there that rank as must-see TV?
I can think of only one right now: Orphan Black.
So meanwhile enjoy the romantic attachments of the regulars, try spotting the Toronto scenery and wonder about such fine series as Combat Hospital which failed to attract sufficient viewers south of the border to stay around for more than 13 episodes.
ROOKIE BLUE RETURNS FOR SEASON FIVE MONDAY MAY 19 AT 10 P.M.