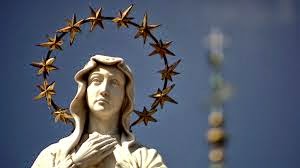 This is the crazy time of the TV year, well before most summer series start.
It's a time when a network can test market something as offbeat and challenging as Miracles Decoded.
The first hour episode premieres on History Sunday May 25 at 10 p.m.
This one is going to prove explosive from the get go.
It's a series that tries to satisfy both people with determined religious beliefs and viewers who favor reason and skepticism.
I think it's successful catering to both because there's a refusal here to sensationalize any of the stories portrayed as fact.
Miracles Decoded tells both sides of the same narrative and is reasoned and coherent. It leaves room for doubt on both sides.
Three stories are presented every episode.
In the first we visit with dedicated pentecostal Christians in rural Kentucky/
They are portrayed as nice, law abiding folk who take their Bible extremely literally as they interpret portions of the Gospel of Mark which teaches how to handle poisonous snakes as one act of sheer faith in the power of God.
In a second segment we visit a young Polish mother who has always venerated the Black Madonna and all things associated with Polish born Pope John Paul II.
The third part looks at the activities of a Mexican shaman who is trained in modern medicine but also uses ancient techniques to drive the devil from a severely possessed young woman.
In Middlesboro, Kentucky, this tiny congregation dare handle fore without any one being burned.
We're told outsiders are always going to be doubtful of their practices.
And indeed reptile experts show us that it's all in the way the congregationalists shake the snakes that disrupt the reptiles --usually the snakes do not bite in that state.
But I'm not giving away too much by saying something does occur before the cameras and how the preacher reacts will surely astound viewers.
The Polish segment looks at the case of a young mother told her unborn baby has not been developing in the womb and will be surely born dead. She works through the Virgin Mary and summons up prayer as her way of coping and the baby born at just two pounds continues to startle medical exerts by breathing and continuing to develop.
It's a case of science getting it very wrong and religion riding to the rescue.
The Mexican story set in Guadalajara shows how supernatural forces continue to defy modern psychologist until ancient treatments are used.
All three stories are exciting to watch and boldly presented.
This series plays like a 60 Minutes of the epic battle between Faith and Reason and was made by Saloon Media (executive producer Michael Kot)with Steve Gamester the show producer).
MIRACLES DECODED PREMIERES ON HISTORY CANADA SUNDAY MAY 25 AT 10 P.M.
MY RATING: ***1/2.