Never Ever Do This At Home Returns 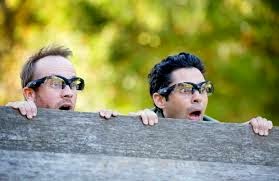 "It's crazy but we're being paid good money to blow things up," nervously laughs Teddy Wilson, one half (along with co-host Norm Sousa) of Never Ever Do this At Home.
The spin off of a Norwegian TV hit weekly sees the guys parachuting a bathtub into the air or hiding behind chairs as an electronic lazy susan goes berserk.
"I can't ever remember having so much fun," jokes Sousa. "It brings out the child in me --and in Teddy. Who wouldn't like to go on a binge like this?"
Last season the Canadian spin off went through the roof in the ratings wars causing Discovery to order a fresh batch of half hour episodes.
The first two are running back to back Monday night at 9.
But Discovery has a real feast for fans on Victoria Day with a marathon of all the first season episodes starting at 1 p.m. followed by new episodes at 9 p.m. Got that?
First of all the producers had to find a house the owners wanted completely destroyed.
"We found one this year outside Bradford (Ontario)," Wilson reports.
"It actually looks nice but it got prettied up a bit. The owners had to have it demolished anyway because it was ramshackle and crawling with asbestos.
"We merely hurried the process along."
Each episode consists of three "what if" propositions which the guys test out to instant merriment.
In the first episode the stunts involve launching a 150-kilogram cast-iron bathtub up a ramp, through the air and plop into a bathroom.
Also not to do at home: the boys motorize a lazy susan after building one and finding it is way too slow. Something goes awry and they are splashed from tip to toe with various condiments.
In another episode the bed of a flatbed truck is turned into a transportable hot tub --look out for potholes when the driver picks up speed!
I should mention about here that the boys do not deploy stunt doubles at all.
"There have been some nicks along the way," Wilson allows.
Wilson says "it is a scientific show --barely. " The show goes where no real scientist would dare to go. The explosions are bigger than in first year but that's us right there looking on in wonder."
Every experiment can only be done once for obvious reasons. So the crew use as many as 20 cameras in the hope everything will be caught.
Also there's the sad state of the house which is progressively deteriorating. Sousa says something that might knock it down has to be saved for last.
Also available is a fire fighting team from Brantford who were around all the first year. 'They've helped us innumerable times," allows Sousa.
Sousa says the show used up al the Norwegian experiments the first season. "Now we are all on our own."
Does anybody ever get hurt? Wilson says he tends to get grazed while "Norm is the injured one."
Sousa had molten lead plop on his head and he got scalded in the hot tub" but it's all in a day's work."
To their credit the co-hosts keep everything percolating --literally --and Sousa gets off some neat one-liners.
And Don't Ever Do This At Home is a big popular hit especially with the younger set who seem to thrive on such explosive tales.
Already this second season the series has used nine pounds of rocket fuel, 127 pounds of gunpowder, nine lawnmowers, 16 taxidermy heads and 24 cucumbers (don't ask).
SEASON TWO OF DON'T EVER DO THIS AT HOME PREMIERES ON DISCOVERY MONDAY MAY 12 AT 9 P.M.
MY RATING: ***.