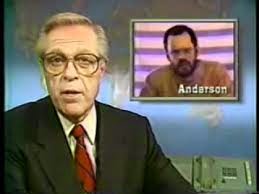 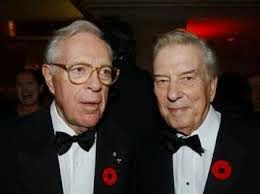 It was September 1970 and I was new to the job of TV critic (at The Hamilton Spectator) being all of 24 and just out of university.
But there I was at the CBC's fall launch for critics mingling with the likes of The Globe And Mail's sage Blaik Kirby and  The Toronto Star's acerbic Patrick Scott.
There was a grand total of 35 others from across the country assembled at CBC's Jarvis St. headquarters --plus Mary Anne Lauricella from The Buffalo Evening News.
"Anything you need just phone me," smiled Knowlton Nash as I mingled with such CBC stars as Tommy Hunter, The Friendly Giant and radio's Barbara Frum.
As one CBC reporter told me that day "Knowlton is your best source for what's happening at the CBC. He knows where the bodies are buried. In fact he buried a few himself along the way."
Nash had been a bright on-air reporter until 1969 when he took a job as head of CBC News And Current Affairs.
Born in Toronto in 1927 he'd started out with the wire service British United Press and later worked for CBC Washington correspondent James Minifie who he told me "Was a legend. I learned all the elements from him."
When CBC-TV came on the air in 1952 it was Minifie who insisted the national broadcast be on at 11 p.m.
"That was the earliest film from Washington and Ottawa could be flown to Toronto to be edited and used on air," Nash explained.
Paul Kidd who worked the print side for Southam news in Washington said he'd watch in awe as "Knowlton was on the phone for hours tracking down stories. He also kept his bosses in Toronto fully informed --he had a real knack for seeming to know what stories they'd want covered."
Said Nash: "I covered the Cuban Missile crisis (1962) which seemed to change by the hour. I covered the 1968 riots after Martin Luther King Jr. was gunned down. And I was just about the last reporter to interview Bobby Kennedy before he was assassinated."
I was at another TV critics convention in 1976 when Nash got up and told startled TV Critics that "I've lost my Mr. Clean" --a reference to the defection of Lloyd Robertson to CTV.
All the critics hailed taxis and rushed over to CTV for the Robertson press conference leaving the chief CBC flack Cec Smith in tears as he shouted "Come back! This is my junket!"
Nash later told me it was a blessing in disguise. "Lloyd left because he was classed as an announcer and couldn't change his copy, interview anybody on his own, he felt humiliated and left for that freedom. Subsequent CBC anchors owe a lot to Lloyd."
Nash surprised everyone by picking young Peter Kent as the next anchor but Kent eventually defected to NBC. Then in 1978 Nash had another surprise as Kent's successor --he picked himself.
Veterans grumbled but Nash was just right for the job. His owlish exterior got him dubbed "Uncle Knowltie". As a news reader he seldom stumbled--but that was because he virtually memorized each script starting hours before the air time.
In 1992 second stringer Peter Mansbridge announced he had a definite offer from CBS Morning News to take over as anchor.
Nash gracefully bowed out of anchoring The National rather than have the CBC lose Mansbridge and instead hosted several news programs on CBC News channel.
Nash wrote several must-read books on TV including The Microphone Wars on how the CBC was being reduced by government cut backs.
I last talked to him about four years ago when he was vacationing in Florida with wife Lorraine Thomson who produced Front Page Challenge and hosted her own CBC-TV series VIPs.
"The National isn't what it once was," he told me. "But then what is? TV's audience has fragmented. I miss the old days when a nation would sit down every night and get their news but today it's considered old fashioned.
" I think I was there at the best of times."