The Normal Heart: Must See TV 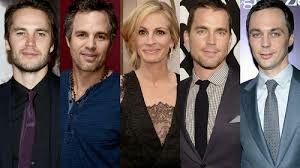 It only took 29 years for Larry Kramer's incendiary play The Normal Heart to make it to TV after numerous attempts to turn it into a movie (Barbra Streisand owned the rights for a decade).
The wait was well worth it.
Written during the heights of the AIDS epidemic, the original was a cry for help as thousands of gay men died from an epidemic nobody wanted to tackle.
The Normal Heart premieres on HBO Canada Sunday May 25 at 9 p.m. and is certainly one of the highlights of the spring TV season.
In brilliant prose Kramer took on the gay establishment, President Ronald Reagan and gay bashers everywhere who considered it retribution for an abhorrent life style.
Directed with feeling by Ryan Murphy (Glee) The Normal Heart is a mesmerizing tale of a particular moment in history when the world's humanity was tested and found wanting.
Of course the TV version lacks the visceral hatred of the original although the epidemic has never been cured --there are still thousands of recorded new cases every month.
What Murphy has done admirably is soften the edges of the narrative and turn it into a sad love story that is quite affecting.
At the core of the story there's vengeful New York city gay activist Ned Weeks --Kramer was writing in autobiographical mode here and turns Weeks into a brash loud mouth who many people simply cannot stand.
Mark Ruffalo gives a virtuoso performance as the tortured man watching friends die all around him and unable to change the attitudes of government or society.
At first I thought Ruffalo was being too quiet because Ned's screams and rants are the only things that seem to change the entrenched positions of the bureaucrats.
But as his performance deepened I was impressed by the way he balanced the difficult features of Ned's personality which so rattled his brother (played by Alfred Molina) that the two stopped speaking.
That's why The Normal Heart works best as an historical piece.
We're close enough to the event to remember the catastrophe but far enough away to need an over all guide to how it affected so many people in different ways.
The film starts strongly with the leading physician Dr. Emma Brookner (Julia Roberts) reading the riot act to a group of gay activists and telling to cease and desist from unrestricted sex.
Her suggestion sets off a firestorm --At the time sexual freedom was the way some gay activists defined themselves and they heckle and curse her.
The TV movie starts with a look at frolicking at Fire Island with anonymous partners but quickly turns dark and disturbing. On that very beach there is prolonged coughing from Craig (Jonathan Groff), the lover of closeted stock broker Bruce (Taylor Kitsch).
In fact so many events are jammed into the next two hours one critic has already suggested the material should have been expanded into a miniseries.
Murphy wisely uses a lot of TV names to puff up the ratings. As Kramer's lover and a New York Times Style reporter Matt Bomer (White Collar) shines --the actor really lost 40 pounds from his already slender frame as the disease wasted his character's body.
In a supporting role Jim Parson excels particularly when his character must enunciate at a funeral the mounting toll of victims --it's a gut wrenching moment.
Roberts is surprisingly strong as the doctor who equated her own polio bout with the mysteries of  AIDS. You can also spot Joe Mantello, BD Wong and Finn Wittrock.
TV has tackled the subject before most notably in the PBS TV movie Longtime Companion (1989) and the miniseries Angels In America (2003).
Which doesn't make The Normal Heart any less a must-watch experience.
THE NORMAL HEART PREMIERES ON HBO CANADA SUNDAY MAY 25 AT 9 P.M.
MY RATING: ****.