The View And I 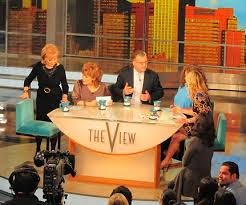 TV Maven Barbara Walters seemed to spend the whole of Friday on ABC saying farewell.
First she bid adieu on The View --a show that she co-owns with ABC --and who should be there to add her two cents but former First Lady Hilary Rodham Clinton.
Following Mrs. Clinton (who may be the next U.S. President) were Oprah Winfrey and Diane Sawyer both of whom surely owed part of their success to the trail blazing TV stardom of our Barbara.
Then in a two-hour prime time special which her company produced Barbara said farewell again aided by dozens of clips of the rich and famous she's interviewed in her almost five decades of  TV appearances.
What was evident was Walters virtually invented TV's present celebrity culture and there were hints along the way she thinks it may have gone too far.
I remember Walters from her early on appearances on the Today Show when she was "the girl" assigned to cover fashion and recipes --politics was definitely not part of the game plan.
When she defected to ABC to become co-anchor with Harry Reasoner there was a huge amount of tension.
I remember in 1976 I was interviewing Morley Safer in his CBS office and we were watching live coverage of President Carter's Inauguration on ABC.
Everything Walters said Reasoner interrupted her to say "No Barbara this is the real story."
Safer was incensed and said Reasoner's unprofessional outbursts meant one of them would have to go and soon it was Reasoner who left.
Walters left the anchor desk, too, and after interviewing the likes of Anwar Sadat and the Shah of Iran she became famed for her celebrity interviews.
She always had to get her subject to cry and she even asked Katharine Hepburn what kind of a tree she'd like to be.
The Walters specials filled the coffers of ABC  but I always felt Walter's reputation as a journalist had suffered.
In fact I was among the first TV critics to visit The View when it debuted on ABC 17 years ago --Walters devised the series, owned a part of it but chose Meredith Vieira to be the actual moderator while she was a mere panelist.
The Toronto Star entertainment editor of the day ordered me "not to go near that d-d show" because he thought it worthless. I defied him during a New York city trip so he plopped my story on the back page of the entertainment section.
He was soon gone from the section but The View persists to this day.
I got to sit in the audience and afterwards chat up the four co-hosts in their dressing rooms although Walters soon fled pleading another engagement.
The special contained nought bits of her often prickly personality that saw such co-hosts as Star Jones, Rosie O'Donnell and Debbie Mantelopoulos decamping from the scene from time to time.
Re-inventing TV culture has made Walters wealthy and famous.
But I'm wondering if deep in her heart of hearts she doesn't regret deserting the world of hard TV news for the soft underbelly of chatting up second rate celebrities?