The 10 Worst Christmas Movies On TV 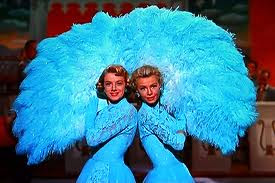 I accepted a freelance assignment to view every single Christmas movie running on TV this season.
And it's getting me down already.
I've had to sit through some terrible stinkers let me tell you.
And here are the worst ones so far.
1. White Christmas (1954) is just plain awful. Oh, there are a few great Irving Berlin ditties along the way including the title song. But Bing Crosby looks mighty bored and no wonder --he'd done the same story as Holiday Inn just 12 years before. Rosemary Clooney and Vera-Ellen are cute when warbling Sisters. But Danny Kaye is completely unfunny and he mugs terribly. The sets are so artificial --like the corn flakes for snow. I liked this one when it played at Toronto's Imperial theater way back when I was just eight. But I wasn't a TV critic then.
2. The Bishop's Wife (1947) has Cary Grant returning to earth as an angel to mend the fractured marriage of Loretta Young and David Niven who is an Episcopalian bishop who wants to construct a new cathedral. When I mentioned it once to Grant he made a face and called it "Among the worst films I ever made." And he wasn't exaggerating one bit.
3. Susan Slept Here (1954) --the title was considered so salacious in 1964 that the Ontario censor balked a bit. Dick Powell's last movie and I can completely understand --he's a Hollywood writer saddled with teenage delinquent Debbie Reynolds for the Christmas holidays. Debbie as a delinquent? She's as phoney as Powell's hairpiece and the movie isn't one bit suggestive. This was 1954 after all.
4. Miracle On 34th Street (1947) like most commercial Christmas flicks contains no references to the "J-" word at all. Edmund Gwenn is a puckish Saint Nick everyone thinks crackers and Natalie Wood aged 8 is a very knowing daughter with divorcee Maureen O'Hara as her mom. Shots of what New York city looked like in 1947 are the only redeeming features.
5. The Man Who Came To Dinner (1942) has some nasty zingers from Monty Wooley but as a celebration of Christmas it's a bust. Joan Rivers was once going to do a modern version and said after viewing it she had to walk away. "These days the patient would be air lifted to a hospital and not spend weeks in the family's living room living high off the hog."
6. Remember The Night (1940) presents Fred MacMurray as an ambitious D.A. who takes shoplifter Barbara Stanwyck home for the holidays where she meets an unbelievable family right out of Norman Rockwell. It just doesn't make sense and the dialogue is pure corn.
7. Silent Night, Deadly Night (1984) is a cult classic, I'm told. The cult of Satan I'm guessing. Kid sees a guy in a Santa Suit going on a killing spree and after growing up in a Catholic orphanage tries to ape the killer. Released during the holiday season it's pretty terrible on all counts.
8. We're No Angels (1955) casts Humphrey Bogart as a Devil's Island convict who helps a shopkeeper and family in the true Christmas season. Bogey's worst ever film which is saying quite a liot.
9. The Night They Saved Chreistmas (1984) has Jaclyn Smith and Art Carney in something about a mining company threatening to blow up the North Pole in search of an oil field. I watched this mind numbing fantasy almost until the bitter end.
10. Scrooge (1970) is a singin' and dancin' edition of A Christmas Carol with Albert Finney as Scrooge in an over the top characterization. Eleven totally forgettable songs and no relief for the poor viewer. Blah!
I submit the best Christmas movie remains It's A Wonderful Life (1946) because it's very scary and not at all cheerful like most holiday films I've been watching.
Posted by james bawden at 7:33 PM

That should be Silent NIght, DEADLY Night -- released at the peak of the 1980s slasher flick craze, and possibly the last one pegged to a holiday.