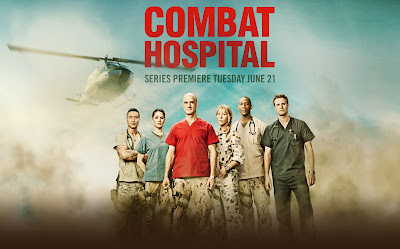 The crises in Canadian TV always start with drama.
Consider the evidence: this fall Global TV had zero hours a week of filmed Canadian drama while CTV had a mere hour.
Remember the CRTC dictates that Canadian networks in prime time should have 50 per cent Canadian content which isn't happening right now.
And now on his most excellent TV website TVFeedsMyFamily veteran critic Bill Brioux reveals that Global's high rated but pricey locally made drama series Combat Hospital is probably kaput.
In Canada the summer series notched huge ratings even higher than Rookie Blue.
But ABC-TV has passed on ordering a second season and Global apparently doesn't have the resources to make it without that all important sale to an American network.
This isn't the first time a Canadian show fared well on Canadian TV but got dumped because the American co-producer pulled the plug.
Consider the fate of Falcon Beach (2005-07) which ran for two seasons also on Global but perished when Disney declined to finance a third year.
And Citytv's ratings wow Godiva's (2005-06)--all about life in a trendy Vancouver restaurant--=collapsed after two years because there was no U.S. sale.
It's true CBC's DaVinci's Inquest (1998-2005) lasted for seven seasons and 91 episodes completely without U.S. money although the entire package was later sold to CBS's affiliates for late night showings.
But another CBC Vancouver series Intelligence (2005-07) didn't make it to a third year despite superb reviews because of American disinterest --although both Fox and CBS tried and failed to make an American spinoff.
CBC's Being Erica currently runs on the American Soap weblet and that sale was a factor in CBC continuing to order new episodes of the ratings weak dramatic serial.
I visited the Combat Hospital set out in Etobicoke in the summer along with a gaggle of veteran scribes and later enthusiastically reviewed the series.
But if this means only shows that can be sold to the U.S. will survive on Canadian TV then we have a huge problem.
Flashpoint kept going on CTV because of the CBS commitment which is apparently now over. CTV's The Listener bombed mightily on NBC but CTV is apparently thinking of a later syndication deal on American TV.
It seems only CBC has the financial resources to make Canadian shows that are not set in some kind of hazy never land.
In January Global premieres a new ultra Canadian drama series in Bomb Girl starring Meg Tilly and shot in Toronto's Distillery District. And by the way I think it's smashing.
And then along comes The Firm which is shot in Toronto but stars American import Josh Lucas. It's also on Global.
Canadian TV movies and miniseries have virtually disappeared over the past few years.
And it all makes me wonder if Canadian TV as a separate entity has any fuutre at all.
Posted by james bawden at 6:07 PM