Beyond Disaster Worth Catching On Citytv 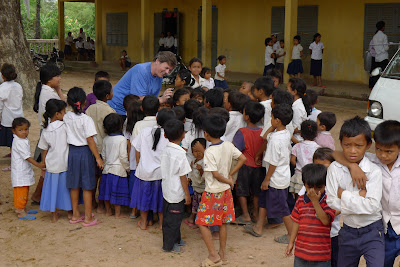 So here we are almost at the half way point in the 2011-12 TV season.
And everybody I'm meeting up with keeps asks me what's happened to Canadian TV.
It's disappeared that's what has happened: fewer dramas and comedies than I can even remember and even the news specials seem to have ceased.
That's why Citytv's new documentary Beyond Disaster seems so very special. It ditches the false bonhommie of the season to deftly examine the cracks and fissures on our foreign aid.
The compelling hour is part of an irregular series of specials titled Tough Choices With Gord Martineau and with the departure of Lloyd Robertson from reportage Martineau has become Canadian TV news's new iron man.
Citytv plans three more specials co-written and co-produced by Martineau to highlight his expertise in reporting.
And Martineu wisely chose as his first project a look at the Canadian relief organization GlobalMedic which ferries in life sustaining supplies to regions devastated by earthquakes or tsunamis or armed conflicts.
He shows footage from his earlier expedition to Haiti where the devastation was complete and returns to find the conditions still appalling.
These scenes get so scary the crew is advised to stay inside their vehicles. An old woman has died on a dusty main street and nobody bothers to stop and attend to the body.
His tour guide is Toronto paramedic Rahul Singh who first took him around years ago. Nothing on the surface seems to have changed although Singh keeps reiterating it has gotten --slightly --better.
Says Singh on the phone:"I think Gord was startled by how bad it still is. It's quite a sight --sad. Government agencies do not seem to have the means to turn it around."
Martineau and Singh also travelled to Cambodia where the challenges are completely different. A civil war 30 years ago left the countryside pockmarked with land mines. There are hundreds of thousands of them still hidden underground to go off and maim innocent young children.
But Singh also shows how a very simple solution --involving the most primitive technology can be used to clean the dirty river water and make it drinkable for youngsters who are perishing from cholera. The cost is about $50 a family and involves a combination of gravel, sand, some chemicals and cheesecloth..
The theme is that small is better, it can put the initiatives in the hands of the villagers and let them chart their future.
"When Gord asked me to be in this film I wasn't sure," Singh says. "It's difficult walking around with a cameraman following you. It took me some time to adjust to that."
In Haiti hundreds of million of dollars have been pledged but little has been done so far.
"We're saying give us less money than that and we can show you the results. We can cut corners to get things done," Singh says.
Another project underway: "Buying $100 winter coats for the children of the Attawapisket reserve. We're not about to tie up more money but approaching problems from a different perspective."
Maineau (scarcely changed from the guy I first interviewed at CFTO in the Seventies) surely knows what makes an hour of TV riveting and what questions to ask. Beyond Disaster challenges viewers and offers some small solutions and it's a must see especially at this time of the year.
Beyond Disaster was directed expertly by Karen PInker who produced and wrote it with Martineau.--all for 90th Parallel Productions.
It's an impressive start for the occasional new series of specials..
TOUGH CHOICES WITH GORD MARTINEAU: BEYOND DISASTER PREMIERES ON CITYTV SUND. DECX. 18 AT 10 P.M.
MY RATING: *** 1/2.
Posted by james bawden at 9:09 PM