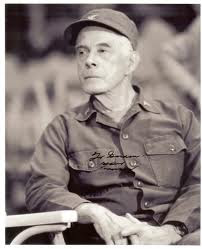 So there I was in the summer of 1976 taking a tour of the 20th Century-Fox backlot with Harry Morgan of TV's M*A*S*H. as my guide.
"See that soundstage over there," he said as he pointed. " We shot a lot of State Fair (1945) there. And that New York street --we shot Orchestra Wives (1942) along it. And over there at the M*A*S*H soundstage I worked with Hank Fonda on the western classic The Ox-Bow Incident (1943).
Harry Morgan who passed this week at the age of 96 had started on the lot in 1942 in the Randolph Scott actioner To the Shores Of Tripoli (1942).
"Played a character called Mouthy," he laughed. "I never forget the character's names.
"I was Ebenezer Burling in The Loves of Edgar Allan Poe (1942) and I was Henchman Nat in The Oregon trail (1942). I was the bath attendant in Somewhere In The Night (1946) --my part was so small I didn't have a name or even billing.
" In The Big Clock (1948) I was Charles Laughton's masseur and my assignment was to kill off Ray Milland."
Morgan chuckled as he toddled off to his dressing room and we had a pleasant lunch and he kept inviting me back to the M*A*S*H set every summer when I was attending the TV Critics' convention.
It just so happened the Century Plaza hotel had been constructed on part of the old Fox back lot and all I had to do was skip out during a boring mass interview and head for the back doors that opened onto the modern Fox studios.
And I did this every year until the final press conference announcing the end of Fox which was held in 1983. The normally taciturn Morgan was teary eyed on the occasion.
And I met up again with Morgan when he was filming an episode of The twilight Zone in Toronto in 1988 co-starring Canadians Cedric Smith, Barbara Chilcott and Robin Ward.
He talked about retirement then but whispered "But I'm a mere tad of 75."
In terms of TV series Morgan could well boast he'd been co-starred in more than any other actor around.
"I was busy in movies until 1954 when I jumped into December Bride on CBS opposite Spring Byington and it lasted five seasons. We shot before an audience until the last season when Spring and Verna Felton could no longer remember their lines so we had to do it on a soundstage in bits and pieces.
"Then CBS had the idea of a spin off called Pete And Gladys. I had been the next door neighbor who was always talking about his wife in comical turns. But when audiences actually got to see her it wasn't so much fun anymore.
"Then I co-starred in The Richard Boone Show (1963-64) which was NBC's idea for a TV repertory show --same bunch of actors every week but different stories. Audiences just didn't understand that at all.
"Kentucky Jones (1964-65) had Dennis weaver as a vet who adopts an orphan and I was his assistant and it lasted one season. It was full of the cutes.
"I then spent three seasons opposite Jack Webb on the revised Dragnet (1967-70). Jack was a strange character, very protective of his formula but very creative. He wanted me to talk in that staccato style of his and sometimes I just couldn't say the stuff.
"Hec Ramsey (1972-74) was one that Webb specifically hired me to be in..Webb told me it was Dragnet meets John Wayne and the critics picked that up. Richard Boone was the star but he was so cantankerous NBC cancelled us after two seasons.
"After M*A*S*H I did one called AfterMASH (1983-84) but viewers wondered where Alda and Swit were and it lasted one season only.
"I didn't learn my lesson, I was back at it with Blacke's Magic (1986) with Hal Linden from the guy who created Murder She Wrote. NBC panicked after initially bad ratings and we got cancelled too quickly."
Morgan then played Judge Bell in two TV movies opposite Walter Matthau (Against Her Will and Incident In A Small Town) and told me "He is an actor's actor. Listens! How many young actors do that?"
Harry Morgan listened intently every time I interviewed him.
For me and for millions of others he'll always be Col. Sherman Potter.
And I'm missing him already.
Posted by james bawden at 12:13 AM