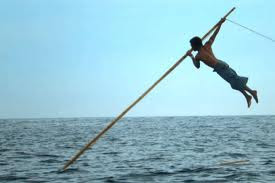 You can't spend all day unwrapping presents can you?
For some there's church in the early morning or at midnight on Christmas Eve.
And a hearty family meal at noon or 4 p.n. depending on the custom.
That leaves plenty of time to hunker down in front of the flickering TV set on Christmas day and night.
Among the highlights:
** The strangest marathon seems to be AMC's salute to Duke Wayne. How that ties in with Christmas I'll never know. But there are chances to catch up with such later day epics as El Dorado, Rio Bravo and that's plenty fine with me.
** HGTV counters with a Holmes On Holmes marathon. Every episode seems the same as the last. Gruff Mike enters a shoddily built new home only to discover dozens of discrepancies the homes inspector simply overlooked. Lots of bleak faces as homeowners are told it's gonna be a virtual redo. And at the hour's end Mike plays kissy face and hugs as he departs another holmes perfect.
** The Queen's Palaces is TVO's marathon --the British made series examines all those monstrous wrecks that constitute HM's homes. Most are old and dusty and however does she afford those heating bills? The look at Henry VIII's ruble was fascinating --spiders seemed to pop out of every crook. No wonder HM is always off to other countries --it's must be to get away from all those bill collectors.
** CBC plays it ultra safe with yet another rerun of Miracle On 34th Street (1947) showing us what a wonderfully civilized city New York was back in 1947 and a rerun of the 2010 TV special A Heartland Christmas.
** CTV dumps three Shrek movies in its prime time package with nothing Canadian about the lineup which is disappointing.
** Global has the 2006 flick Christmas On Chestnut Street but there's a conversation with Premier McGuinty at midnight.
** A&E which was once a real Arts and Entertainment channel has a Parking Wars marathon which really tickles me. See owners fight for the right to get their cars back despite the acres of (U.S.) government red tape.
** Not to be outdone History Channel has a Pawn stars marathon. Hey, this is one of the few reality shows I rather like, at least a bit of history gets mixed in there.
** Comedy has a Big Bang Theory marathon which is all right by me although I'd much prefer a Corner Gas marathon or a King Of Kensington one.
** Space has a Doctor Who marathon --I'm not sure which series this one is all about but it seems to be the latest edition.
** Outdoor L
** National Geographic has a Python Hunters marathon --if you like snakes.
** BBC Canada's marathon is one devoted to Property Virgins which is great but why a Canadian series getting pride of place on our sole British channel.
** But the winner of the best marathon programming is Discovery World HD with has a great marathon --all six hours of the flawless series Human Planet. I started watching the preview DVD and couldn't stop. The first hour, Life At The Extremes, looks at a whale hunter in Indonesia, the Dorobo hunters of Kenya who dare steal meat from a pride of lions, a little girl traveling 50 miles through the frozen mountains to school in Tibet. The photography is outstanding. Why not chose this one to watch?
Posted by james bawden at 12:07 AM