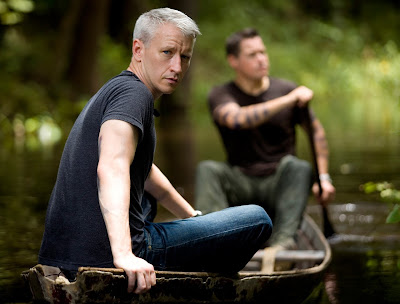 The November Sweep ratings are in and the news isn't great for tsome of TV's biggest talkers.
First, Piers Morgan who was plopped into Larry King's coveted CNN talk slot after King's ratings began a downward slide.
Well, it turns out Morgan's numbers are even worse.
Morgan is crazy about himself but few American viewers seem to be.
The November ratings give him an average of just 154,000 viewers a night in the 9 p.m. slot.
Far from stemming the slide Morgan has started his own avalanche.
He's down 4 per cent among the key demographic of viewers 25 to 54.
By contrast MSNBC's Ed Schultz averages 201,000 nightly although he has dropped 35 per cent over the year.
I just don't think Americans cotton on to Morgan's Britishness. His interviews with American politicians have been all over the place. Arts interviews seem a whole lot better.
King thrived for 20 years because he was the voice of the people and took pride in the fact he never studied up for an interview.
Also, Morgan's shows are taped and look it --he apparently didn't have the experience to go llve as King did after decades as a radio talk show host.
Morgan has stepped down from America's Got Talent in order to better prep for each night's CNN show. That's an indication he knows he's in serious trouble.
There's a similar trouble with Anderson Cooper's day job.
The personable CNN news host also has a daytime chatter show plagued with low ratings since its fall debut.
I'm thinking Anderson is just too serious for the fans of daytime who much prefer hyped, confrontational shows than the low wattage discussions his show projects.
As is typical on a show in trouble there's been movement at the top: executive producers Cathy Chermol and Lisa Morin are departing and Terence Noon who did a great job in rebooting Dr. Oz into a TV celebrity is coming in.
Apparently things came to a head during an edition on the Penn State scandals when the executive producer asked the audience no to hold back and Cooper disagreed with her. Tempers flared.
Good for Cooper not wanting to be exploitative but such seriousness does not grow ratings.
And then there's the strange case of Rosie O'Donnell now installed as the celebrity talker on Oprah Winfrey's new TV weblet OWN.
So far ratings have been disastrous --there's been a 49 per cent drop since Rosie's debut in October.
Look, I liked "Rosie Lite" when she had her daytime syndicated talk show and did mostly show bizzy interviews.
Then she got all feisty as part of The View and finally left in a huff --but let's face it veteran Barbara Walters was not going to be sideswiped by anybody.
Here she's a disappointment. The other night she snagged Phytllis Diller and incredibly the show just sagged --Diller in her 90s was quite funny.
Rosie isn't getting the big, competitive guests most nights because her ratings are so low. Like Conan she's been relegated to a network few peopled know exists.
Update: I just caught Rosie with stand up Brett Butler and it was a terrific show. Maybe Rosie is going to turn her show around.

I'd predict a quick cancellation here.
Posted by james bawden at 10:06 PM