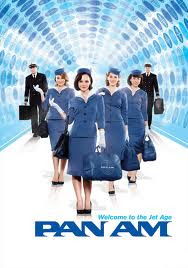 It's been quite a year for TV watchers like yours truly.
Canadian TV virtually disappeared from even so-called Canadian netorks during the fall with the compliance of the CRTC which is supposed to regulate these kind of things.
Reality TV sunk to a new low if that is possible --the relentlessly self promoting Kardashians were found out and how.
And Daytime TV sank like a stone with the cancellation of many soap operas that had been running for decades and the exiting of imperious Oprah Winfrey.
Here's my Ten Worst list of the TV disasters of the year.
1. PAN AM: It was rumored to be the big new hit of the year. Trouble is nobody told the TV audience who tuned in once and then tuned right out. One of the most expensive shows in recent years --I guess all the money was squandered on getting the accoutrements of the Fifties just so. Because $10 million was squandered on the plot. But all the intricate irony of Mad Men was gone and instead we got just another vintage soap. Story lines were underwhelming. The four gals were cute and completely unconvincing. What a letdown!
2. THE PLAYBOY CLUB: Another dopey return to the Fifties. But if you were Hugh Hefner's age then just maybe this one was for you. Eddie Cibrian was hired as the lead presumably because he looked a bit like Jon Hamm. But he couldn't act like Hamm, that was the problem. Seeing those busty young things adorned in their bunny outfits incensed the Parents Television Council but nobody else batted an eye. This one sank like a stone proving the Playboy Years are well past us. Who actually reads Playboy these days anyway?
3. PRIME SUSPECT: Mistake number one was snatching the name of the brilliant British show with Helen Mirren and then mucking around with the story. That excellent actress Mario Bello was left to flounder in a part making no sense. All the nuances of the original were junked and what remained was just another procedural thing. Critics fixated on Bello's masculine hats. Some excellent actors were scarcely used. Shooting in New York city did not help. A huge, boring bomb, this was predicted by Global's head programmer to be the big break out hit. But what a flop!
4. TERRA NOVA: Loved the CGI dinos. For about 10 minutes. Then realized there was no money left over for scripts. The look of this one shot in New Zealand was terrific. The family profiled emerged as simply dull and listless. I couldn't have cared less about their fate. Even the children I know stopped watching early on. This stinker proves tossing money at the screen doesn't make for good TV.
5. X FACTOR: So there he was on the talk shows, Simon Cowell I mean, and he was predicting huge numbers for the latest reality effort which he imported from Britain. But these kind of musical competitions have been copied so often boredom has set in. Even with Paula Abdul back at his side Cowell couldn't make it work. And let's face it the best contestants had already been nabbed by the competition. It emerged as simply predictable.
6. CHARLIE'S ANGELS: A real dog. Watching sweet young things racing around in swimwear no longer cuts it. This one flopped because the original producer Aaron Spelling is dead. And Spelling really believed in such trash, he was TV's great schlock meister. He chose Farrah Fawcett and the show went skyward in the ratings. And Aaron never would have chosen any of the latest batch of Angels. His poor taste meter would have given us far worse talent --hence his success.
7. TORCHWOOD: Moving the classy BBC sci fi show to America ruined it. The final British series, Torchwood: Children Of Earth was pretty wonderful. The U.S. follow up Torchwood: Miracle Day just didn't do it for me, a melange of some bold ideas and bad execution. Charismatic John Barrowman was even moved off center stage to make way for such American stars as Mekhi Phifer. So much of what followed was illogical and just plain confusing. After this mess it's unlikely we'll ever see another Torchwood which is too bad.
8. RINGER: Maybe this one wasn't terrible at all. Maybe it was just plain boring. I thought Sarah Michelle Gellar would have gotten a better vehicle for her TV comeback. But this was soap opera territory and not very well written. She simply looked lost. I simply felt disappointed. Everything about it rang false.
9. PIERS MORGAN: Replacing rapidly aging Larry King with this True Brit has been a colossal mistake for CNN. His show biz interviews are vapid. Larry boasted he never did any research before an interview and it showed --he could cut to the quick and Piers is merely fawning. Also, he has no sense of American politics and when King had politicos foisted on him he was blunt and impertinent.
10. 2 BROKE GIRLS: I thought the pilot had potential. But this one has morphed into a weekly remake of Lucy and Ethel. Or even worse Laverne and Shirley. There may be even worse new sitcoms out there but this one had all the makings of a fun show. I've stopped watching because there's only so much I can take.
Posted by james bawden at 3:44 PM

2 Broke Girls is weird. A surly broad in the lead, and a gorgeous sidekick (with an unflattering 'do). Isn't that why the Bionic Woman remake had failed; too many viewers said, "Wow, look at this remake's other 'bionic woman' guest starring."
They could have named the show, Butch and Bride - for all the hoohaw tripe used as dirty talk dialogue.
Yeah, I wanna watch a show about a crabby gal. Let's hope it gave a practice run for the other young actress.