Alan Park And CBC-TV's RCAF Back With A Bang 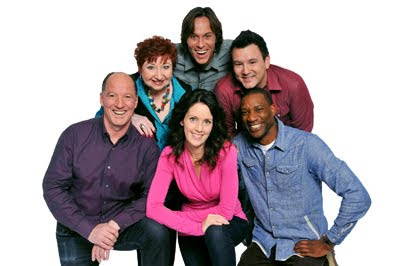 Chatted up talented Alan Park of RCAF fame but because of holiday deadline this was before the actual preview DVD for Not The New Year's Eve Special actually arrived for me to review.
With the DVD running I can now report I'm liking a lot of it. But my suspicion continues CBC made a bad mistake in canceling one of its most valuable franchises.
CBC sources told me at the time the series was pink slipped it had nothing to do with ratings which were actually climbing and even surpassed some shows that got pick ups. It had to do with foreign sales: RCAF with its dead on parodies of the like of Stephen Harper proved a tough sell in foreign markets.
Park was part of a foursome of younger comics imported to beef up RCAF. The others: Jessica Holmes, Penelope Corrin and Craig Lauzon.
Only Holmes is missing from this annual edition which runs a day later than New Year's Eve to make way for CBC's NHL Hockey coverage. Back also are veterans Luba Goy and stalwart Don Ferguson.
I had already journeyed down to CBC's cavernous and mostly vacant Front Street studios to watch a Friday night taping that started at 7 p.m. and ambled on to 10:30. leaving the studio audience in a state approaching lethargy.
However, the actual show all spruced up and tightly edited for TV is lively and often hits marks with great malicious glee.
The funniest sketch I saw was a very bizarre parody of Mad Men which had its three players --Park, Corrin and Lauzon--in stitches and they had to stop several times to regroup.
But surprise! It was one of the pieces that got cut!
"Look, I don't edit the show," says Park. "But it was one of the bits that didn't make it for reasons of length.."
Park also does the dandiest impersonation of President Obama --not only does he look like the president when in nutmeg makeup he catches the guy's odd cadence --Obama always seems to lower his voice at the end of each line.
The skit has Oprah Winfrey --impersonated by guest Arnold Pinnock in the Lincoln bedroom as she suggest she should run for president.
The skit starts off terrifically but winds down clumsily and Pinnock in drag needs more padding to approach Winfrey's girth.
Park is plain terrific in a dead-on if highly exaggerated spoof of the way CBC's Ron James talks to his studio audience --I'm remembering it was James who got RCAF's weekly slot so maybe the malice is deserved.
Other highlights: Luba Goy as Ann McMillan interviewing Princess Kate and another Goy bit that has her facing Green Party leader Elizabeth May.
Lauzon shines as a simpering Stephen Harper and as the Blackberry president who offers customers a free iPhone so they can check for outages.
Corrin scores as the distaff side of the Lang and O'Leary report --even her thick red lipstick matches. The real Kevin O'Leary is present and as obnoxious as ever.
RCAF founding father Don Ferguson has fun with the RCAF timeline and as the world's most important man in a fake Mexican beer commercial.
The skits that got cut can still be seen on the RCAF webpage I'm told.
Also guesting on this edition: Ron MacLean, Adam Beach, wrestler Roddy Piper who is really funny.
This special boasts a new directotr Wayne Moss plus new writers in Rob Lindsay, Wayne Testori and Kevin Wallis.
Park told me there was an inevitable whiff of sadness -RCAF founder Roger Abbott died this year--and appears in a stock shot with the late John Morgan. Members of Abbott's family were in the audience.
Park says the Ron James parody was difficult --he wrote it and watched James clips to get the nuances of Maritimer speech.
"It's strange because a lot of our grips also work on his show. When I saw they got it I knew it was working."
I've always thought RCAF should tour in a format that would have them doing one of their radio broadcasts. I first caught the troupe iat Hamilton Place in 1979 doing such a show to an overflow audience..
Park agrees saying "We did talk about it but then Roger became sick and spent summers getting chemotherapy. He was trying to step back a bit you see."
Park says "I'm terrible at auditions"--one reason you don't see him in guest spots on TV drama series shot in Toronto. "So I'm not on Flashpoint --yet."
Aside from his RCAF TV work I wish Park and Corrin would try their own anti-sitcom --as a quarreling couple always trying to top each other at work and in life. I can almost see it now,
RCAF: NOT THE NEW YEAR'S EVE SPECIAL PREMIERES ON CBC-TV SUND. JAN. 1 AT 8 P.M.
MY RATING: *** 1/2.
Posted by james bawden at 12:55 PM

As you've said CBC axed airfarce due not to ratings but a lack of foreign sales, how well are 22 Minutes, Mercer Report and Ron James Show faring on the foreign market?