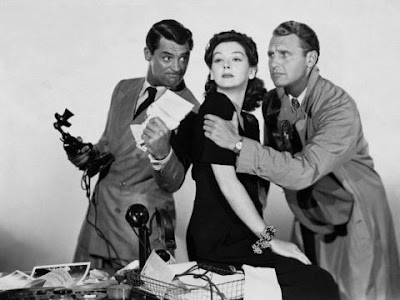 When I first started going to Hollywood in 1970 I made sure Ralph Bellamy was on the top of my "must interview" list of great stars past and present.
He lived magnificently on the top of Mulholland Drive in baronial splendor. I just phoned him up, pleaded my case, and he invited me over a few days later for an afternoon of reminiscing.
As far as I was concerned Bellamy had done it all and done better than any other actor of his day.
It's just great that Sunday the 14th is Ralph Bellamy day on Turner Classic Movies and what a feast for movie lovers like me.
The Secret Six (1931) at 7:30 a.m. is certainly an essential: Ralph's first picture paired with such then unknowns as Clark Gable and Jean Harlow.
RB: "I remember sitting in a speak easy with Clark at the end of shooting and he was saying he saved every penny because he didn't think his movie career would last long."
The Wolf Man (1941) at 6:45 p.m.is another classic.
RB: "On that one Warren William got second billing after Lon Chaney Jr. I got third. But look closely as the film continues and Warren disappears quite quickly from view. A delightful alcoholic, he was shipped out to a sanatarium by the studio to dry out, that's why."
His Girl Friday at 8 p.m. remained Bellamy's personal favorite. My favorite Bellamy comedy The Awful Truth (1937) is at 9:45 p.m. I consider it the funniest ever screwball comedy.
RB: "Director Leo McCarey asked me if I could sing. I said no. Then he asked Irene Dunne if she could play the piano and she said only a bit. So he had me sing Home On The Range while Irene clunked away. It always gets the biggest laugh in the picture."
In 1978 i joined him on the set of an NBC pilot titled Clone Master starring Art Hindle shooting at the Paramount lot.
Ralph later told me the network turned it down as a possible series because it was considered too good --"They wanted a show completely unchallenging."
In 1988 I caught up with Ralph In Toronto where he was shooting the movie The Good Mother. And I marveled at his stamina at age 84.
He surprised me by making the miniseries War And Remembrance in 1988 and the TV series Christine Cromwell in 1989. His last picture was 1990's Pretty Baby.
Ralph Bellamy died in L.A. on November 29, 1991, aged 87.
TCM does itself proud by saluting one of moviedom's most proficient actors.