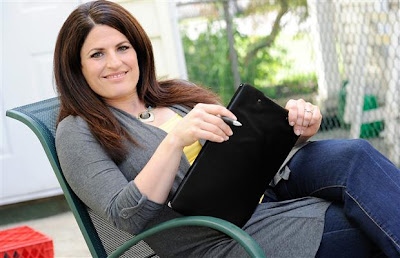 When the DVD preview for the new HGTV series Consumed arrived I held off for awhile.
Couldn't watch for days. Visions of a similar series called Hoarders danced in my heads.
And I hate Hoarders which I feel unfairly preys on people who need real help.
But when I finally plopped in the DVD for Consumed I liked what I saw.
The series host is efficient but sympathetic Jill Pollack who told me she's a de-cluttering expert and has worked on such shows as Sally Jessy Raphael and Rosie O'Donnell.
"So I know what works on TV and what doesn't."
What doesn't work is brow beating people who are messy.
In the first hour long show Pollack visits with a pudgy young couple who have simply been overwhelmed. The wife keeps everything --she even has boxes of old children's clothing stuck in the crawl space. And her amiable husband is just as messy --his garage is filled to overflowing with junk.
The wife is busy home schooling her kids although they really have no space for books and desks.
Pollack uses "shock therapy" on them --each member may keep only 10 items and everything else is despatched to storage.
For the next month they live in a virtually barren home where they must resort their priorities and then decide what to junk and what to keep.
"Only then do we take them to storage where they must sort through everything in a day, keeping only essentials," Pollack told me. "We get tears. we get anger. But it's something that just has to be done.
"It's an agonizing process and viewers can see the process that ends with a home where people can actually live comfortably in their homes.
"It's not that their house is small, it's just the accumulation of debris. This young wife was so busy looking after her three small kids and without much support from her husband that she gradually lost control of the home."
Even better is the second episode where Pollack visits a middle aged couple with three grown sons all of whom are clutterers. This family is so tightly stuck that they must eat dinner at various locations throughout the home --there's no room at the dining table.
One son has all sorts of sports equipment, the husband keeps every bill --he is a tax accountant. A son has a hamster and his mother has never seen it for the debris. There's so much clutter the distraught mother cannot sleep at night. One son bursts into tears describing how messy the home has become.
Plop five clutterers into a s,all space and this disaster is the result.
Made by B.C.'s Paperny Films, Consumed is compulsively viewable. Pollack's shock therapy really works and the homes are given a redesign to show how the space should be used.
"I don't judge, I don't preach, I help," Pollack explains. "And we do return months later just to make sure the families haven't reverted to cluttering. So far they're all holding firm, they're happy, they see that our redesign helps them to live normal lives.
"And I think it makes for good TV. We have a positive approach, no recriminations. Viewers seem to relate to the process.
" Watch and you'll start tidying up your home. I guarantee that!"
CONSUMED PREMIERES ON HGTV TUESD. AUG. 30 AT 10 P.M.
MY RATING: ***.