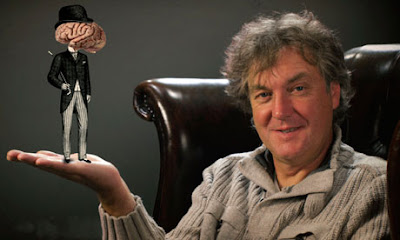 I've seen the future and it's not on TV. It's on my computer.
More and more these days I'm watching my TV right on my Apple and that's only going to increase I can fearlessly predict.
To back up my prediction the best new TV show premiering this week isn't on TV at all. It's on your computer.
Just call up DiscoveryChannel.ca/things to catch the first installment of a very fast paced new show called Things You Need To Know.
Anybody can and should watch but the core audience seems to be senior public school kids and that's why each segment of the half hour is only about two to three minutes accompanied by heavy graphics and catchy animation.
First subject up is the weather which fascinates us all, myself included. I'll never forget the recent afternoon when The Weather Channel told me it was sunny outside but all I saw out the window was the pelting rain accompanied by bursts of thunder.
So the basics are effortlessly tossed our way by genial host James May.
He goes through all the typical conversation points: how and why the earth tilts, why El Nino is so powerful some years, why hurricanes are different from cyclones and tornadoes.
It's all fast paced and information packed -- I sometimes felt items were too short --and I gather that the typical place for this 30 minute series (which runs 36 episodes) would be in the late afternoon or early evening --if the broadcaster were a conventional network.
I watched the DVD preview tape yesterday and already fiorget some of the segments because they were too fast paced. However animation and presentation are excellent and what more can one expect in a 30-minute sepisode?
Instead Things You Need To Know goes up on Discovery's web site for a week and only then will it appear on Discovery Channel Thursday Aug. 25 at 8:30 p.m.
I've got a feeling the TV audience will be huge, the web audience decidedly less so but that will change over time until TV will be the minor player.
The episode is composed of 12 distinct "mini-sodes" tightly edited because the attention span of young viewers is seemingly fading all the time. I wouldn't liker to try a pop quiz on what was learned because simply stated it's an example of information overload.
This is a Discovery-BBC co-production made by 360Productions and Yap Films. Executive producers are John Farmer and Elliott Halpern. The BBC presence means presenter May comes with a pronounced British accent.
And then a week later it's all available for TV watchers on Thursday May 25 starting at at 8:30 p.m. Got all that?
MY RATING: ***.