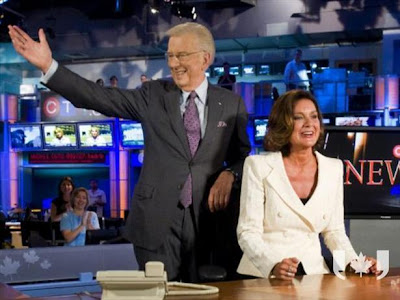 "I was there the day you joined CTV News in September, 1976," I told Lloyd Robertson a few months ago at the fall CTV Launch.
Robertson's eyebrows went way way up and he asked simply "Goodness! Just how old are you?"
It was 1976, days after Labor Day and CBC was having its annual TV launch for visiting Canadian TV critics --plus one intrepid female critic from the Buffalo News.
In those days CTV didn't even bother having one. My big Canadian program is Littlest Hobo," CTV President Murray Chercover once barked at me. "You want me to promote THAT?"
All of a sudden the CBC affair at Studio Seven was suddenly quiet as the head of CBC news and current affairs Knowlton Nash stepped forward to say something like "I've lost my Mr. Clean!"
We all knew what that meant --Lloyd Robertson --CBC anchor for the past six years had defected to CTV.
"Come back! Come back!" shouted CBC PR head Cec Smith as reporters piled into taxis which sped us up to the Charles St. East headquarters of CTV.
Robertson told me that day he'd decided to move "Because I truly want to be a complete anchor".
CBC regulations at the time categorized him as an announcer meaning he couldn't change his TV script which was written by others and he couldn't do the kind of on location reporting which was one of his strong points.
About 20 minutes into the CTV spiel the doors of the auditorium crashed open and in sped Harvey Kirck looking a trifle distraught. He'd only been told about the change hours before and had taken a plane to get back to Toronto.
Robertson's daring move changed the face of Canadian TV news reporting forever.
After Robertson left his CBC successors (including first Peter Kent and then Knowlton Nash) were able to fully function as reporters and commentators as well as news readers for the first time.
And CTV News got a necessary jolt which helped it leap and sprint into the forefront as the most watched national TV broadcast in Canada.
"I'm not going anywhere," Robertson said a few months ago. He'll be relinquishing anchoring duties to Lisa LaFlamme (chosen over Tom Clark in a controversial bit of casting).
"But I'll be host of W5 which is a great brand for CTV. And I'll do some reporting, too. I'll be around."
Robertson, 77, is smaller in person than one imagines from seeing him on TV. And younger looking too. In terms of :"trust and tradition" --two staples viewers are polled on he's still at the top of the anchor heap.
After all he's been doing it since 1952 when aged 18 he was hired as an announcer at CJCS in his hometown of Stratford. In 1954 he jumped to the new fangled CBC TV and then spent four years in Winnipeg and two more years in Ottawa before joining the Toronto announcing team.As Robertson recently told me "I think it was a mistake for (CBS's) Walter Cronkite to retire at 65. He had a lot more to contribute. " So has Robertson.
Robertson will be available as a commentator for the really big events and also has an idea for a book.
I don't know a single nasty story about him. When he joined with Kirck CTV insiders predicted a real cat fight but the two became friends.
"I still respect his integrity," Kirck told me when he retired as co-anchor in 1984.
Indeed I once printed a letter in Starweek from a frustrated oldster who asked why "Harvey towers over Lloyd when they're standing but they're the same size when sitting beside each other?"
A delighted Robertson commissioned the resident CTV artist to commission a cartoon panel showing Harvey Kirck sitting on the floor with Lloyd sitting on a large number of telephone directories. Both autographed it and it's right up on my wall as a prized possession.
So I can't wish Lloyd Robertson a "happy retirement" because "Jim, I'm not retiring".
Before his last broadcast as CTV anchor on Thurs. Sept. 1 there'll be an hour long CTV special with clips from Robertson's finest moments. .
Posted by james bawden at 10:39 PM