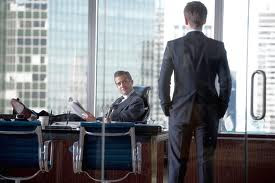 This is it --Monday night marks the start of the fall TV season and the first batch of new entries are on cable networks trying to get a jump ahead.
And first up Monday at 9 on Bravo! is the rather carefree legal series Franklin And Bash. Remember the days when U.S. legal series like Perry Mason and The Defenders were carefully crafted salutes to the American legal system?
No more,Franklin And Bash is irreverent to say the least as Mark-Paul Gosselaar and Breckin Meyer are nicely teamed in TV's latest bromance.
They play halves of a legal firm that fights for injustice for the little people meaning they often have to result to outrageous courtroom antics.
Gosselaar plays Franklin, Meyer Peter Bash and they operate out of their home with a few other stranded legal eagles and they use their skills to try and get people acquitted. Also starring is Dana Davis as an ex-con Carmen who is now on the law's side and Kumail Nanjiani who is their agoraphobic legal researcher.
Somehow they attract the attention of one of the wealthiest lawyers in town, brilliant, mercuiral Stanton Infeld, played with great elan by Malcolm McDowell and on what seems like a whim he hires them as adornments to his sprawling law firm to kind of shake things up.
The buddies play video games while debating finer points of the law and Franklin even steps out of a jacuzzi nude in the middle of as party of well wishers just because he wants to.
The two cases they're working on in the pilot are strange to say the very least: a pot bellied airline pilot was determined to join the mile high club just before the plane he was supposed to be piloting crashed and a dominatrix who so beat her husband he died from severe bruising.
Lots of joking not allowed on network TV follows although I kept thinking of that old CNBS hit Simon And Simon because of the heavy doses of male bonding throughout.
And some of the courtroom stunts are so outlandish I'm wondering what judge out there would allow such foolishness.
Still Franklin And Bash is fast paced, reasonably funny, very light and insubstantial and very trendy with its irreverence to the law.
While Franklin And Bash is eminently watchable but Suits makes for riveting viewing.
The premise takes some getting used to. Patrick J. Adams is cool Mike Ross, so brilliant he can read anything and forever be able to re-quote it in detail. A college drop out and sometime drug user he's first spotted in a college law exam cheating --he's taking the course for somebody else and getting paid for it.
Through some convoluted plotting he actually gets in to meet super sharp legal star Harvey Specter played by Gabriel Macht and they become the most unlikely of partners in a top New York city law practice.
Suits refers to the tailored elegance Specter insists from even his most junior subordinates.
This one is superior because the bonding between Adams and Macht is right here from the beginning.
And the first two legal cases are expertly plotted with some big surprises along the way. This one is hardly lightweight the way the lawyers in this firm cynically manipulate the system for gigantic monetary rewards. And both Ross and Specter have some characteristics which are unheroic. In short we recognize them as complex human beings.
In fact Mike despite his brilliant mind is the brilliant one while Harvey is the super shark lawyer out to get top dividends for his firm no matter what.
Suits is slick and sleek and its view of the inner workings of the American legal system is just plain nasty fun.
Shot in the gleaming glass office towers of Manhattan it emerges as cynical as a series can be and something basic TV networks can't compete with. The chemistry between the two lawyers makes this one compulsively viewable.
FRANKLIN AND BASH PREMIERES ON BRAVO! MONDAY AUG. 22 AT 9 P.M.
MY RATING: ***.
SUITS PREMIERES ON BRAVO! MONDAY AUG. 22 AT 10 P.M.
MY RATING: *** 1/2.