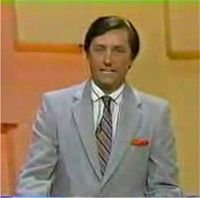 Part of my decades long job as TV critic was to interview the game show hosts.
And at the top of my favorites list was Jim Perry who has died at 82.
In 1974 I had to venture to CFTO's cavernous studios to report on as new series called Definition which clearly was the bastard child of CHCH's Party Game.
Perry was the amiable host and that day he was taping five half hour episodes with funstress Rose Marie and Richard Deacon.
There was a guy on set with a laugh machine turned up to high volume and every time Perry said something funny the air waves would explode with buckets of canned laughter.
And Definition ran late afternoons on CFTO from 1974 to 1989.
Perry's big gig of the year was hosting the Miss Canada pageant a role he held from 1967 to 1990.
At the end of the broadcast Perry would warble "The Fairest Girl In Canada" to the beaming winner.
He also took over from Charles Templeton as host of the CTV game show Headline Hunters which was a sort of poor man's Front Page Challenge.
"I was born (in Camden, New Jersey," he told me.
After duty in the Korean War he decided to become a vocalist and his first big gig was replacing Eddie Fisher as staff singer at Grossingers in the Catskill Mountains.
"Then I was straight man to Sid Caesar all over the place--I still used by real name Jim Dooley. When I joined AFTRA there already was a Jim Dooley on the books so I took my mother's name of Perry.
But his first game show hosting appearance was in Canada on Fractured Phrases in 1965.
Back in the U.S. he hosted the game shows Eye Bet and The Money Maskers later called Bingo At Home which ran in syndication from for 13 weeks in 1969.
"My family moved to Canada for a bit --I still have dual citizenship."
He was back in the U.S. as host of Card Sharks and in 1969 was the announcer for the short lived That Show starring Joan Rivers.
When he took over Definition in 1974 "I had no idea it would last 15 years.
"For the first few weeks I was the announcer and when Bob McLean left I replaced him--Dave Devall became the announcer --he was also the weather guy."
In 1978 he was cast as host of NBC's Card Sharks --"I did two pilots but was so busy in Toronto Bob Eubanks did the daytime version and Bill Rafferty the night time edition."
"I even did pilots for two game shows that never made it to TV: Casino and Twisters."
Starting in 1982 Perry fronted the revamped Sale Of The Century which lasted until 1989 --he also fronted a syndicated night time version.
It was inevitable that he would appear in the 1980 TV flick The Great American Traffic Jam opposite fellow hosts Wink Martindale, Jack Clark and Art James.
"I spent a  decade commuting between L.A. and Toronto," he joked. "The total was ten different game shows. Try matching that."
I always found him a swee,t unpretentious guy. One one of the L.A. TV Critics Tours when he was promoting one of these shows I  walked into the interview room and tried to trick him with confusing questions.
"I recognized your Canadian accent," he shouted back.
Te couple celebrated their 50th anniversary in 2009 and both son Sean and daughter Erin worked backstage on various quiz shows.
And as far as I'm concerned nice guys sometimes do finish first.