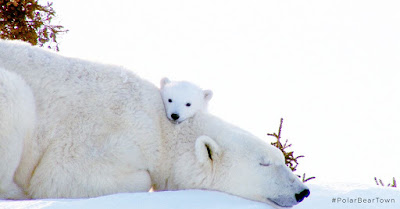 As I meander around Toronto these days people are always asking me are there any new must see Canadian TV series.
I'm usually stymied by the request but after watching the new series Polar Bear Town have
I got a winner for them.
You can see for yourself --the next new episode premieres on OLN Tuesday night at 9. Got that?
Look, it's the beginning of a new TV season so I've been inundated with new product.
When I was finally prodded to give Polar Bear Town a chance I really liked what I saw.
For one thing this show is oh so very Canadian.
It's also meticulously stitched together, well photographed and edited (from Merit pictures) a look at the northern Manitoba town of Churchill which was built directly on the migratory path of the world's largest polar bear migration.
Every fall upwards of 1,000 very hungry polar bears descent on the town and its environs as they attempt to reach the forming pack ice where they can feast on seals for the rest of the winter.
Says producer Merit Jensen Carr "About that time the town of 800 springs to life. There are tourists everywhere coming to witness these great creatures up close. It can be very dangerous but it's also an exciting time."
To make her 12-part series Carr had to get her crew in position and ready to shoot at any time of the day or night.
"It happens for just seven weeks in the year. We had to get everything shot on the first take."
Although the majestic polar bears occupy center stage Carr's method is to profile the unusual citizens of Churchill each of whom is touched in different ways by the bears and their environment.
"That's exactly right," she is saying on the phone. "We personalize story. Because the entire town is dependent on these animals."
I usually tease OLN for being the network of storage lockers wars and Dog, the bounty hunter --both shows I admit to watching on my own..
But Carr praises the network for being with the project all along and even sending executives up to cheer on the production.
"There's a different version of six hour-long episodes being made for Smithsonian TV in the U.S.," she says. "And British TV has bought yet another version. Each network has a different set of requirements all of which we have to meet."
In one episode we get to visit with a young waitress (originally from Quebec)mauled last year by a migrant bear. She steadfastly refuses to leave her home town and seems proud of surviving the attack and getting back to her job.
The profiles of the denizens are nothing short of amazing.
"Young Gun" Kelsey guides his clients right into the waiting bears  --we see how one Brazilian photographer reacts to the most dangerous moments of his life.
Kelsey also shows an abandoned bear trap that would cause a mother bear incredible pain before inevitable death and also doom her cub who could not survive alone at that stage.

There's "The Sheriff" Brian who has established a compound for Eskimo dogs who at one point were almost extinct. We see him tossing great swabs of meat to the dogs while a hungry bear looks on and tries to steal a meal or two along the way.
Then there's Dennis who is known as the bear whisperer. --a pioneering environmentalist who trule cares about the futurte of these unique creatures.Says Carr "Usually the cub will stay with the mother for two years. It's a long period to get them up to scratch.
"In some scenes we see a terribly emaciated bear --he's a senior at the end of his life. One can tell the health of a bear from the behind --the bigger the  behind the healthier."
Carr says at one time errant bears would be shot dead.
"But these days the bears are the saviors of the town. We show how the whole community bonds to trap and tranquilize bears off course and get them to places of safety."
This week's episode is titled "Trick Or Trap" as the town organizes citizens' patrols to keep the bears at bay as the kids go trick or treating at Halloween.
"The town is a microcosm of Canada,"Carr believes.
"There's a strong Inuit and Metis component, great characters who like the loneliness of the north,younger people here for adventures. And all are dependent on the bears."
POLAR BEAR TOWN'S EPISODE SIX PREMIERES ON OLN TUESDAY NOVEMBER 3 AT 9 P.M.
MY RATING: ***1/2.