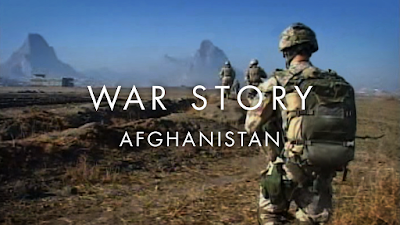 I'm always writing about the most disturbing trend on Canadian TV these days.
Simply stated it's the lack of Canadian stories.
Producers only want to make series they can sell to U.S. TV. That means fine dramas like Saving Hope and Rookie Blue have their Canadian roots heavily disguised for easy foreign sales.
And then along comes something as powerful as War Stories.
Each Remembrance Day a new batch of the series emerges.
This year War Story:Afghanistan examines the biggest out and out conflict involving Canadian soldiers (outside of peacekeeping) since the Korean War.
There are six half-hour episodes premiering over three nights --Monday November 9, Tuesday November 10 and Wednesday November 11 running in chronological order with two back-to-back episodes per night at 8 p.m. Got that?
Simply stated this is must-see TV.
Cancel all dinner engagements and better yet make sure if there are kids in your household they watch, too.
My intention was to only watch the first two episodes but I got hooked and just had to see the rest.
This is the fourth year of the series but I find these tales the saddest perhaps because the protagonists are still very young --watching the ones on D-Day I could only marvel at the heroics of veterans now well past 80.

As usual the Toronto-based film makers have distinguished themselves.They are Barry Stevens (series director and executive producer), David York (executive producer) and Bryn Hughes (producer).
When I watched the World War II series a few years ago I was immediately  taken by how so few survivors still exist and how previous seasons looked at D-Day, Korea and Vietnam.

The entire effort is told through the eyes of the men and women involved giving it a verisimilitude that can't be beat."When I was interviewing them it was their casual bravery that I noticed," says series director Stevens.
Biggest star of the show? "It just happens one of the participants, Harjit Sajjan has been made Canada's new Minister of Defense --always wearing his Sikh turban he was a crack intelligence officer and his testimony is vital to our understanding the narrative.
But the biggest hero? It just has to be medic Paul Franklin who had his legs blown off--Rick Mercer made him semi-famous by revealing every year Franklin has to assure Veterans Affairs his legs are still missing in order to qualify for his benefits.

But just as heroic is Lt. Sarah Keller who lost her husband in one battle.
"There is a lot of actual footage," Stevens tells me. "But not much is from Canadian TV which under reported the conflict. There's a lot of American footage, some British  though."

The first half hour looks at the arrival of Canadians, Edmonton's Princess Patricia Light Infantry, aiding their American allies in Kandahar, Afghanistan.
Four Canadian soldiers are killed in a senseless example of "friendly fire" which is covered by the actual cockpit recordings of the Americans who were stupid and blindly went ahead with an attack after superiors warned them to reconsider.

At 8:30 comes the second episode which is even more painful to watch.
The Canadians return to Kandahar in 2005 as Americans switch to fighting in Iraq. "
"Canada's mission was both military and reconstructive. The Taliban remained everywhere. A Village elder says he will out wait all the invaders," Stevens says.
The second night looks at the sustained combat in Kandahar. And then Canadian soldiers launch  "Operation Medusa" still the biggest operation in NATO history.

On Wednesday night at 8 "Hearts And Minds" looks at a Canadian bringing health care to a remove village while "The Long Way Home" looks at battle field medical treatment and treatment of the dead.
I can't think of a more meaningful way to observe Remembrance Day.
Says Stevens "If we're run out of wars to cover, I'm actually happy. There are no glib answers to any of this. Everything has consequences.
" I just think the soldiers need to be listened to. Why it all happened is very important. At some point we changed from liberators to invaders."
All four editions of this remarkable series deserve to be out in boxed DVD sets so students can be reminded what war is really like.