Against All Odds: A Canadian Success Story 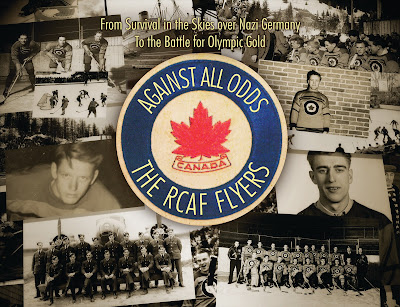 I've always found it passing strange that some of the best Canadian TV programming of the season always comes on Remembrance Day.
And that's because Canadian networks can't import this content --it must be home grown.
Consider the very fine new documentary Against All Odds: The RCAF Flyers which debuts on November 11 at 11 a.m. on Sportsnet.
I thought I knew my Canadian hockey history but this one celebrates the stunning gold medal winners of Canada's hockey team at the 1948 Olympics against all odds.
I compulsively watched this one and I'm still at how good it is.
And I also got to speak on the phone with one of the three surviving principals Murray Dowey who as Flyers goalie racked up a string of Olympic shut outs which may never be equaled.
"I don't quite know why Canada later forgot all about us," he says with a chuckle. "But it was a different time. And the media had been calling us the misfits. Some misfits if you ask me."

George Stroumboulopoulos narrates unobtrusively making these fantastic "misfits" the heroes front and center.
Writer/director P.J. Naworynski (for Infield Fly Productions)has done an impressive job of setting the stage and surprisingly enough discovering rare footage of the actual games played in St. Moritz, Switzerland.
"For one thing," Dowey tells me. "There had been the decision not to even send a team.  Then we assembled just three months before the event."
It certainly was a weird bunch of mostly war veterans Most had played pick up hockey but were hardly anywhere near professional caliber.
The director introduces them in breezy character sketches.
Dowey jokes he was recruited only after the scheduled goalie was judged not up to scratch.
"I'd played some hockey with Turk Broda who was the Leafs goalie. Remember there were only six NHL teams at the time. That meant six professional goalies --the teams in those days only suited up one man."
Dowey remembers he was phoned up and given 15 minutes to make his mind up. "I said OK, of course no money was involved. Had a day to get to Ottawa from Toronto where I worked for the TTC.
"Downsview airport was fogged in so I had to take the milk train --the worst ride I ever had."
The guys sailed on the Queen Elizabeth in steerage with the American team bunked in posh quarters.
"The Yanks thought they'd have it all over us. What arrogance! Canada invented hockey not the United States."
A brilliant mixture of rarely seen newsreel footage intermixed with the memories of the three survivors gets us rooting for the under dog team which usually lost games by wide margins.
"We were terrible at first," remembers Dowey.
One press comment :"There's no hope for this team" summed up the dismal prospects.
Dowey also remembers meeting the gold medalist Barbara Ann Scott who won in figure skating. He also remembers a photographer asking team mates to hoist her on her shoulders.
"That shot made the papers everywhere."
Dowey says the team played defense "like there was no tomorrow. You know in the first game I got a penalty for catching the puck and tossing it in front of me. Had to go to the penalty box.
"But the Swedes still couldn't score."

One would think these winners would be talked about forever. But this is Canada where modesty prevails.
"It didn't happen," Dowey tells me. "I went back to the TTC. Oh, we'd have reunions every few years in Ottawa."
Asked to summarize he says "It was a great victory for Canada. I guess because most of the guys were from Ottawa it really never registered here in Toronto."
And regrets?"I just wish they'd had face masks in my day. I wish I'd had a glove as big as those mitts today.
"I also wish they'd let us keep our uniforms. We had to hand them in. I gave what I had to a London museum-- my glove for one.  Wish I had more to give but that's it."
Against All Odds quite successfully recreates a great time in recent history when Canadian hockey stars ruled the world. What a fantastic triumph for the nation!