If The Poet: A True Success Story 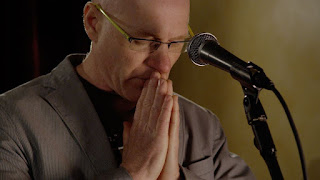 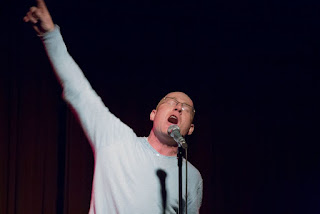 First of all I had never heard of Ian French.
And I was completely unaware of Slam Poetry.
So why did I find the new CBC-TV documentary If The Poet so compulsively watchable?
I think the secret lies in the success story it portrays and these true tales of achievement always intrigue me.
Also, I watched because I'm trying to see how CBC-TV's new documentary series  Firsthand is evolving --so far I thought last week's entry Reefer Riches excellent.
You can check for yourself Thursday November 12 at 9 p.m. on CBC-TV.

The saga in If The Poet captures a bald guy aged 54 who has become a sensation in the art of Slam Poetry.
I can only describe "slam" as a form of rap but without the music.
It's in your face and when done correctly the results can be pretty wonderful.
I think this hour artfully directed by Kim Saltarski (World's Worst Drivers) succeeds because it is utterly unpretentious --French made his Slam debut at age 50 and we watch as he sets off to win the World Cup of Slam Poetry in Paris.
Who knew watching a guy recite could be so exciting.
This true story rewrites The Odd Couple by pairing French with 29-year-old Ghanaian-Canadian poet Ian Keteku who is the trainer trying to get this dude up to scratch.
All the signs seem against French because for the most part his competitors are ambitious twentysomethings who really know how to play to their audiences.
"It owes a lot to standup comedy," director Saltarski tells me on the phone. "I mean you have to be fearless to even try to attempt it. Ian adds a lot of relevant social commentary, he gets it all out there."
Saltarski says his ideas for a TV portrait "started about 2 1/23 years ago. I got funding from Bravo for a 15 minute short and the subject kept expanding and I knew I was onto something bigger.
"I got to know his story and it made sense to keep filming. For one thing Ian had a troubled youth, his brain was wired differently. High school was a real downer but he's so talented he channels all that in to his poetry.,"
So Sakltarski approached First Hand about an hour profile. "And I was told arts coverage was going to be part of their menu so we were on board."
The hour goes deep down into French's early 20s and brushes with the law.
"We had collaborated on a few songs,that's how I got to know and appreciate his talent. And he used that beat to segue into slam."
Says Saltarsaki "That partnership with Keteku is essential to what French is today. "I think . Keteku showed  him how to transform those demons into dazzling, challenging poetry which he performs fearlessly. It's quite a dramatic development and I couldn't have caught it in a short shoot. I just kept filming and filming."
Slam poetry is a sort of contest where challengers have three minutes and ten seconds to win over an oftren difficult audience.
"There are all kinds of contestants. Some participants do the same routine time and time again. Ian is forever changing, that's what makes his ascendancy so amazing."
IF The Poet tracks French's ascent from an embarrassing debut to success in 2013 on the National Championship Toronto Slam Team to winning 2014's Canadian Individual Poetry Slam Championship (in Vancouver).
Then comes World Slam Poetry --Slam's World Series--and it's all high moments of tension dramatic but the results won't be revealed here --you'll have to watch the whole hour.
IF The Poet It personalizes the World of Slam by honing in one one of the art's older practitioners.
IF THE POET PREMIERES ON CBC-TV's FIRSTHAND THURSDAY NOVEMBER 12 AT 9 P.M.
MY RATING: ***1/2.