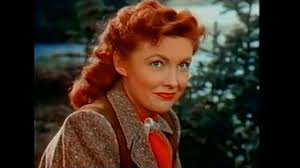 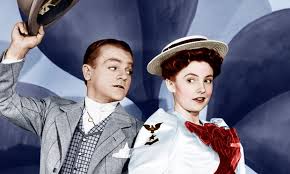 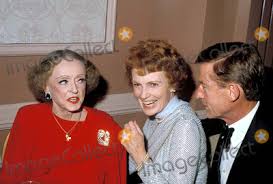 So there I was lounging at Pasadena's Ritz Carlton hotel during the 1992 TV Critics Association summer meetings.
Day after day TV stars appeared to answer questions and show their new shows.
And then I saw I had the weekend off.
A friend had given me the phone number of legendary Warners star Joan Leslie and I just dialed and Joan Leslie instantly answered.
I nervously suggested a phone interview but she said "Oh, no, I'll come tomorrow for High Tea, you know the works, salmon salad sandwiches, fruit cake, empire cookies."
And at 2 p.m. on Saturday she roared up in her Cadillac and we sat down for hours of conversation.
To say she was one of the nicest actresses I ever met would be an understatement. In poise and demeanor she ranked right up there with Irene Dunne, Ann Rutherford and Jane Greer as a true lady of the cinema.
And now I'm saddened by the news Joan Leslie died in Hollywood this week aged 90.
"Do I remember Toronto?" she chirped. "My sisters and I headlined Toronto's Shea's theater for a month in 1934. W went to Catholic school by day and at night I wowed them with my imitations of Greta Garbo and Zasu Pitts."
She was born Joan Brodel in Detroit to wealthy parents --"Dad was a stockbroker who lost everything in the crash of 1929. So we went on the road with an act billed as "The Three Brodels'. So you see I'm not really from a showbiz family."
By age 10 she was a Robert Powers child model earning the huge sum of $5 an hour.
"An MGM scout saw me and signed me to play Robert Taylor's kid sister in Camille (1936). One day I was playing jacks on the set when Greta Garbo waltzed by and her skirt slapped me in the face. She stopped and said 'Pardon'. So I can say Greta Garbo actually talked to me."
She continued in supporting parts until 1940 when Warners signed the pert teenager to a long term contract "and promptly changed my name to Joan Leslie. I played Velma, the crippled youngster in the Humphrey Bogart classic High Sierra. I then made a second film with him, The Wagons Roll At Night and he was soft spoken and charming to this youngster
"On my 16th birthday Jack Warner gave me a new Buick and co-starring billing opposite Gary Cooper in Sergeant York --he won the Oscar for it. I played the child bride Gracie and I was 16 and Coop was 40 and he gave me a doll for my birthday. I met the real Gracie when she and Alvin York came to New York for the premiere. She had never seen indoor plumbing and had trouble flushing the toilet.
"By 1942 I was so hot at the box office I got star billing after Henry Fonda and Olivia de Havilland in the comedy The Male Animal.
"Then came my biggest movie Yankee Doodle Dandy (1942) opposite Jimmy Cagney. Director Mike Curtiz was our director who supplied the fancy camera work but Jimmy supplied the heart and soul and he also won an Oscar. Clearly I was a good luck charm!"
During the war years Leslie received thousands of fan letters a week as service men voted her the girl next door they'd like to come home to. "I'd sneak onto the sets of Barbara Stanwyck and Joan Crawford just to see how they worked. Joan took me to Adrian's dress salon to buy me some new clothes and I shared a makeup artist with Stany."
In 1943 Joan was loaned to RKO to co-star with Fred Astaire in The Sky's The Limit (1943) ."He was 44 and touchy about his age and I was 18. I came back after a weekend and had all my routines down pat and Fred lifted me up and exclaimed 'You really can dance!"
But Warners started typecasting her as the nice girl and the quality of her pictures declined.
"I sued Warners claiming (rightfully) I was under age when I signed my contract. I won but was blackballed by the major studios. I had to take what was offered, mostly B pictures."
Leslie married Dr. Bill Caldwell, had twin girls, and gradually withdrew from acting."My family and my church came first. And I found I didn't miss it."
When we chatted that day Leslie had returned to acting in senior parts in TV assignments like Murder, She Wrote and Marcus Welby.
"I made most money from an Avon commercial that ran and ran in California.
"But recently I'm only getting depressing roles. The way oldsters are portrayed is pretty awful so I've decided to retire again."
She began working for such charities as a home for unwed girls she helped support with the help of fellow retired actresses June Haver and Ann Blyth.
"We joke about being such dull copy, we're still married to our first husbands. The three Brodel girls have had a total of three husbands.
"And if you must know I can still ride a bicycle and I still eat apples."
I freely admit that I'm missing Joan Leslie already.