Discovery's Mankind From Space: Smart TV Is Back 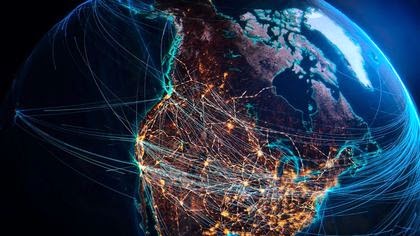 Smart TV is back.
It used to exist in such dazzling TV creations as Civilisation and any number of David Attenborough nature series.
But lately "Smart TV" has been in decline as increasingly dumb reality shows take over.
And then there's the compelling new Discovery special Mankind From Space, TV that will challenge you as well as enthrall you with its dazzling images.
The two-hour special premieres on Discovery Canada Sunday night at 8 and is virtually a must see.
The Canadian-U.K. co-production (Montreal's Handel Productions and UK's Darlow Smith Productions) artfully employs dazzling shots from space as well as magnificent CGI images to fashion a look at the last 12,000 years of mankind and how we've emerged into today's technological driven society.
I enjoyed talking on the phone to the British executive producer Iain Riddick who acknowledges the same inventiveness first graced 2012's Earth From Space TV special as a way of explaining how all of the world's nature could be shown to be interconnected.
"I was having a pint in the local pub," Riddick says. "And I was watching rain drops splash on the windows."
And Riddick wondered where the rain had come from, perhaps from around the world and where it was going.
Then he started thinking of all the ways we humans are interconnected although we may not know it.
And surely the Internet has brought us closer together as never before.
But what about all the other inventions that were equally ground breaking?
What then emerges is a step by step description of everything that has made us what we are today.
"We look at the huge change when our ancestors switched from being hunters and gatherers and began farming.
"Then there are the development of cities although until about 100 years ago cities remained comparatively small."
The invention of steam power by James Watts was another big moment but the modern inventor most honored is Tomas Edison who built the first power grid in New York city.
The matching of inventions with great images makes this one a must-see and tight editing means you must watch every minute or you'll lose the complicated thread.
It's all there from the first great trade routes --the Silk Road --to the cargo container revolution to the way coal still drives many modern economies.
In fact I had a problem with the length --I could have watched for another two hours because all the information is so compacted.
When have I ever complained that a TV production was too short!
But what really go me was the look at the present and insistence with all the problems mankind currently faces from over population to global warming that we can invent ourselves out of most current dilemmas.
"Our ingenuity has gotten us this far," says Riddick. "And we show where new farming techniques can save us as our global population lurches to nine million before settling down.
"We show how interconnected everything is --from trade to all the dazzling electronic connections.We should be able to conquer the future just as we have been challenged in the past and always succeeded."
Riddick has words of praise for Discovery Canada's commitment to the costly production. A different version will air on PBS "--"it is 16 minutes longer but most of that is composed of the experts talking."
This is the second high  quality Canada-UK production I've watched in a week --the other was Mummies Alive and Riddick says with such costs "co-productions are the only way to go.
"We are co-partnered with Handel Productions who have an enviable track record and the CGI comes from Toronto's Intelligent Creatures Inc. and is of exceptional quality."
Think of it! TV that doesn't talk down to you but engages and is breath taking to behold.
MANKIND FROM SPACE PREMIERES ON ON DISCOVERY CANADA SUNDAY MAY 3 AT 8 P.M.
MY RATING: ****.