Is David Letterman Really A Jerk? 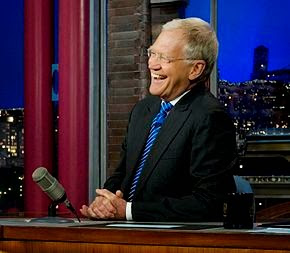 The column by The New York Post TV Critic Don Kaplan says it all.
"To most reporters David Letterman was kind of a jerk!" writes Kaplan.
And sadly I must agree with him.
In my 38 years of writing about TV for The Globe And Mail, The Spectator and The Toronto Star I only met Letterman once.
Whenever I was in New York city I'd dutifully try for an interview only to be rebuffed by publicists.
Letterman generally stayed clear of TV critics and only gave a mass interview once and that was when he jumped from NBC to CBS.
As Kaplan notes Letterman's behavior was very strange indeed given the fact that at CBS he routinely was number two in the late night ratings behind NBC's Jay Leno.
Once when I had lined up Letterman's sidekick Paul Shaffer for a Toronto Star profile it was arranged we'd lunch and then go back to Shaffer's office inside the Ed Sullivan theater to continue the talk.
But Shaffer had to pull out the day of the lunch and a CBS publicist said it was all because Letterman did not want a TV critic on the premises.
But Letterman was not alone.
All those years covering the Tonight Show and I only met Johnny Carson twice.
He also avoided the press and only appeared once before TV critics --and that was as executive producer of a new sitcom starring Angie Dickinson (the show quickly bombed).
Then there was the time out at the Burbank studios when I was interviewing Tonight's director, legendary Freddie de Cordova.
We were chatting away and all of a sudden Carson slipped into the easy chair next to me.
We talked a bit about de Cordova and then Carson left just as quickly.
"That's Johnny for you," de Cordova nervously laughed.
By contrast I interviewed legendary Bob Hope a half dozen times including several telephoners --he was already available.
I spent hours with Dick Cavett in his New York office after a grueling day of taping.
And I was welcomed on the sets of The View, Alan Thicke in Hollywood, heck even Chevy Chase had time for me during his ill fated Fox TV talk show.
Both Carson and Letterman rarely talked about their personal lives.
Carson was touchy about the number of wives he'd had.
Letterman was forced by events to recount his version of a sex scandal that ballooned into a blackmail attempt.
But he blamed newspaper reporters for blowing it all out of proportion.
When a truly huge star was booked as guest Letterman would routinely ban all press from even standing in line for tickets.
And on Wednesday night he blew off reporters from all major outlets --they assembled in his publicist's office to watch the first cut of his last show early so they could file reports before their deadlines (at midnight).
Finally came an edited version of the monologue and Top Ten guests but the rest of the show was deliberately with held.
The final guest list was indeed impressive (including several Presidents, a star studded Top Ten but Letterman seemed listless lest emotion overtake him.
By contrast Johnny Carson's farewell was an emotional roller coaster and remember Johnny was always unchallenged as king of late nights while Letterman's audiences were far smaller.
After NBC ditched Jay Leno it meant Letterman would have to go --a new generation of comics had taken over.
And in Canada we are still waiting for our first successful late night TV talk show.