CBC Does Have A Future

I wasn't sure about attending the 2015 CBC Fall Press Preview because I'd been hearing from employees inside the Corp that the public network was facing dire days.
After all I've been covering these CBC shindigs since 1970 when as a summer student I subbed for The Globe And Mail's late great critic Blaik Kirby.
In those days CBC was riding high and the studio where Front Page Challenge was shot was decorated as a Parisian cafe.
Juliette was warbling away under a rose spotlight as thousands of guests mingled and muched on goodies.
And 45 years later?
Well, CBC's stature is shrinking --the loss of revenues from Hockey Night In Canada was a severe blow.
In recent years the few critics remaining were supplemented by hordes of CBC employees all eager for the free food.
But this time the mood was anything but sombre.
After years of reeling CBC seems in a fine and feisty position to mount a strong counter attack.
CBC will surely miss the departed Republic Of Doyle but Murdoch Mysteries is back for an unprecedented ninth season.
I was able to chat up MM's newest cast member Mouna Tratore who is drop dead gorgeous, a fine, budding actress who knows how lucky she is to get on Canadian TV's most popular drama series.
Then there's the newseries When Calls The Heart, shot in B.C. and set in the Canada of 1910.
And I had the opportunity of meeting and talking with the two personable co-stars Erin Krakow and Daniel Lissing.
She's an Eastern school marm and he's a trusted Mountable and, of course, love ensues.
This on started up as a Hallmark cable series, switched to Showtime and should be a dandy addition to  Heartland as a CBC teacup drama.
Other summer series include Banished, an Australian pick up about the penal colony set in 1787,
Love Child, another Down Under drama series, is set in a Sydney hospital for unwed mothers in the midst of the cultural revolution of the Sixties.
The fall Canadian drama series This Life is set in contemporary Montreal as an accomplished columnist must face a terminal cancer prognosis.
Raised By Wolves will follow the lives of six socially-isolated, home schooled siblings.
Then I had a chance to talk to famed Canadian producer Chris Haddock whose series DaVnci's Inquest and Intelligence truly set the bar for excellent in TV drama.
Now he's back at it again in The Romeo Section stars Tom Bateman as a naive, sensitive young man finding his place in the world.
New comedy series include Will Sasso (MADtv) in Fool Canada using hiddden camera devices.
Canadian comic Jonny Harris (Murdoch Mysteries) does his stand up shtick across Canada in small towns to much hilarity in Still Standing.
Australian comic Please Like Me stars in Please Like Me which starts in July for a summer stand.
And Bruce McCulloch (Kids In The Hall) is back on Canadian TV with yjr vp,edy Young Drunk Punk.
Factual TV will include Keeping Canada Alive which looks at Canada's health care system during one 24-hour drama.
And Hello Goodbye hosted by Dake Curd looks at touching relationships at Toronto's Pearson Airport.
Documentaries are being reorganized under the umbrella title First Hand.
I still say high arts needs its own platform although there will be half hour arts series Crash Gallery and Exhibitionists.
But I would like to suggest CBC think about reviving its old series Rearview Mirror which took gems of ballet and opera from its archives and ran them Sunday afternoons with host Veronica Tennant.
And CBC is also jumpimng into digital productions such as Erik Karpluk band Tahmoh Penikett in Riftworld: Chrionicles.
Also, I see no CBC TV movies on the schedule and music specials which once ran weekly as Super Specials seem to be missing.
Still, it's apparent CBC is fighting back as best it can and with declining resources. 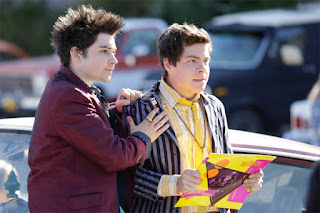 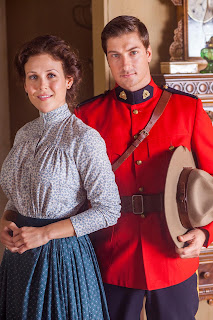