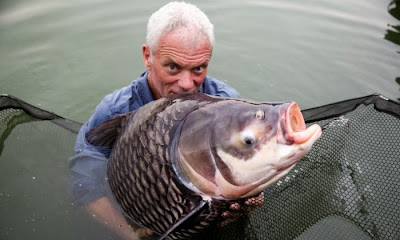 "We  definitely are not a fishing show!"
Jeremy Wade's laughter rings out --he's phoning from Seattle where he's working on the eighth season of one of TV's most unusual shows --River Monsters.
Canada's Discovery Channel is showing the sixth season right now capped Monday night at 8 with the two hour special River Monsters: Prehistoric Terror.
So why is Canadian TV so far behind?
Wade sighs audibly. "In Britain it will soon be time for season eight, in the U.S. they're on the seventh season, your Discovery is in the sixth. That's all I know!"
Wade sounded sleepy but he explained he'd been diving the day before and that requires some exertion.
"If anyone had told me when we began we'd still be at it I would not have believed it."
The show's description may sound bland on paper --a genial British chap fishing in remote rivers around the world --but Wade says that's only the bare bones premise.
Really the show is an ecological series about rare fish which have grown into monsters.
"The locations have to be far flung because these places are untouched by creeping civilization.
"We've shot in a lot of strange places from Manchuria to Bolivia. China is one location which still eludes us. We were once going to shoot in Iraq but can't these days for obvious reasons."
Wade agrees many places have tall tales about fishermen being dragged into the depths by unseen monsters.
"Filming that sort of thing can be dangerous. And, of course, some of these are simply tall tales."
The film company travel light but each hour has a set of talking points which must be met or there's no story.
Monday's special on Prehistoric Monsters could mark a new direction for the series.
"I mean we are close to the bottom of the barrel. This one doesn't take place on rivers. We try and find remains of prehistoric fish and show how their ancestors could be out there.
"And this meant fishing off the B.C. coast for two very strange species. One is called the hagfish so primitive I'm not sure it even is a fish. It has no spine, lives on dead fish and secretes a slimy ooze to keep away predators. I'm told scientists are studying that ooze and think they can find applications for it.
"The other is the ratfish --you've seen the special --it is one of the strangest fish I have ever seen."
One thing about these adventures: he is always shown gently placing the captured fish back in  the water if he can.
"I do eat fish on occasion but not these ones which are extremely rare. We're practicing conservation which is one of the big themes of the show."
Wade's adventures have taken him into blinding rain storms but he fishes away "because the budget isn't big enough to sit around waiting for good weather. It would take more than a  swarm of mosquitoes to stop us."
What Wade likes best about the show is its unpredictability. It doesn't have a script because who knows what he might be pulling from the river?
Favorite catches include a goliath tiger fish caught in the Congo and a 150-pound arapaima caught in Brazil;.
The show will go on for awhile longer but Wade says the number of potential subjects is finite. "We're at the stage we find just enough new rarities to keep going a bit longer."
Another problem is climate change meaning fewer river fish everywhere.
"Sadly, there  has been a marked decline in fish sizes and that means the monsters at the top of the pyramid are declining, too."
RIVER MONSTERS: PREHISTORIC TERROR PREMIERES ON DISCOVERY CANADA MONDAY MAY 25 AT 8P.M.
MY RATING: ****.