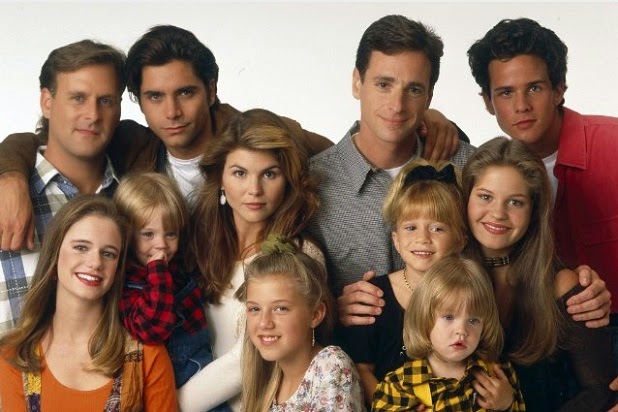 This is the time and place for me to 'fess up to one of TV's Unsolved Mysteries.
But first a little background regarding TV's planned reboot of Full House.
When I told the checkout cashier that Full House --her fave show when growing up--was coming back as Fuller House she let out a whoop that reverberated through the Loblaws store.
The popular sitcom from way, way back  (it ran on ABC 1987-1995)is being revived on Netflix courtesy of executive producer John Stamos who was one of the stars of the original.
But already there's controversy and my friend's grin instantly drooped when I told her the Olsen twins were not coming back.
'The action this time centers around the recently widowed DJ Tanner (Candy Cameron Bure) who is raising her two boys in San Francisco.
So to help her sister Steph (Jodie Sweetin) and best friend Kimmy (Andrea Barber) are also moving in to help out.
Now stop just a minute!
My friend wanted to know all about the Olsen twins and why they turned down a second chance on TV.
Gulp, I had to tell her they hadn't even been asked.
Also absent are regulars Bob Saget, Lori Loughlin and Dave Coulier.
Lori Loughlin has already taken to twitter to moan the absence of an invite.
Things are getting kinda ugly out there.
Now the press is calling the reunion "Half-Full House".
And Stamos and those Olsens are ducking it out in e-mails.
I mean why not a new version of Full House?
Although I'd like to point out the reboot of Boy Meets World as Girl Meets World hasn't done much in the ratings.
Anybody else out there notice how quickly Ironside flopped its second timer out?
Now there's even talk of a Broadway parody musical to run weekends starting September 7 --from the same folks who created a Saved By the Bell parody --one suggested song will be "This House Is Too Full."
And Lifetime now says it will proceed with an unauthorized Full House TV movie set behind the scenes.
Well, if that is true why doesn't somebody from Lifetime call and question me.
That's my secret.
I was on the set twice as a matter of fact.
One lunch time in 1988 I journeyed over and spent an hour with Bob Saget who was anything but the meek dad he portrayed on TV.
He was wildly funny, more than a little bit blue with his humor and confessed he couldn't figure out why his show was so popular.
Then he answered the question by mentioning all the letters from kids in single family situations who wished life could imitate Full House.
The very next year I was back chatting up Dave Coulier who was the funny one on the show and as nice a guy as one could find in show biz.
So right now I'm wondering why Saget and Coulier are not being included in the new Full House mix?
I don't think the remake can work without them.
And I should know --because I was there. Twice.