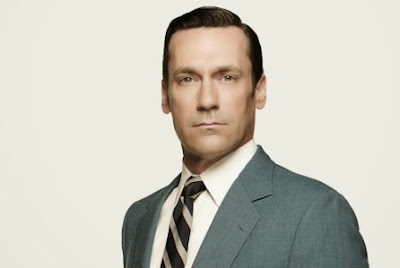 You have to remember most long running TV series never post a farewell episode.
It's bad for the rerun market and so most series simply fade to black.
Except those that come back years later with younger casts like Hawaii Five-0 (a semi-hit) or Ironside (a big flop).
So there I was Sunday night wondering howe all the strands of MM could possibly be summed up in one grand finale.
OK, there was some good news as Peggy and Stan finally declared their love for each other.
And Joan decided to star her own production company which was very tentative because Peggy declined to join up.
Very strange was Peggy and Pete's farewell --they once had an illegitimate baby who has never been discussed in recent years.
And Sally stepped up to become the head of her household as Betty started smoking again as she faced terminal lung cancer --last shot of Sally had he washing the dishes.
People keep asking me if this ending was happy or sad.
Well, it was as ambiguous as the series.
Don seemed to be finding a strange kind of inner peace and then the whole thing ended with a Coke commercial he presumably had produced.
I'll admit that like others out there I was more than a bit confused by what was happening.
Don seemed to re-invent himself and then produced the best Coke commercial ever.
In the past few years the show had been treading water, it was no longer ground breaking because, perhaps, the Sixties were coming to an end.
MM did not give viewers closure, how could it after seven exciting seasons.
The question I'm most asked is why Canadian TV can't produce a series equally brilliant --and inexpensive.
Remember MM had no stars, a few sets and no expensive crowd scenes or action.
Canadian TV producers simply aren't interested in that sort of thing.
On Thursday a very successful Canadian TV series Rookie Blue begins its final season. on Global (simulcast with ABC).
How many critics out there will notice passing?
Rookie Blue like almost all Canadian series was heavily disguised to break in to the lush American market and it truly succeeded.
ABC picked the show up and gave it a summer berth --there was the feeling it was too fragile for regular season contribution.
Canadian viewers didn't seem to care.
We gorge ourselves on American TV even when it gets made in Canada.
Sad to report but the rest of the world is not interested in all things Canada.
The CBC TV movie on Don Cherry was only able to make one foreign sale --to Finnish TV.
No other network wanted to buy into CBC's miniseries on the road to Canadian Confederation and that project died after one TV movie which even Canadians declined to watch.
CTV bought the rights to Mad Men, ran it for two seasons and then dropped it because it wasn't generating much revenue since it was on a U.S. cable weblet.
The Canadian networks like to buy U.S. shows, black out the incoming American signals and simulcast these series to get a double rating.
Which is why Netflix's ongoing success just might be the end of Canadian TV networks as my sources in the CRTC acknowledge.