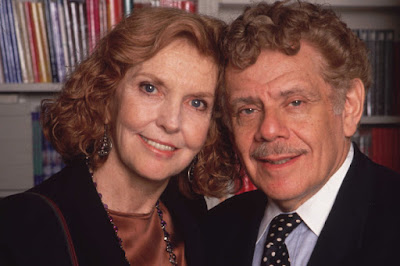 So there I was in June 1975 having breakfast in the Polo Lounge of the Beverly Wilshire hotel with Anne Meara.
The talented comedy actress died last week aged 85 but as she told me and several other TV critics that morning "I'm not a comedienne. I'm an actress specializing in comedy."
We had to breakfast very early --I think it was 7 a.m. because Meara had to get to the set of her new CBS drama series Kate McShane.
"It's a starring gig for me," she laughed. "Highly dramatic. I'm a feisty lawyer gal. And I love that CBS thought enough of my dramatic talents to offer me this lead?"
In fact CBS had doubts about this one all along and cancelled the whole shebang after a mere 10 episodes.
But it did give Meara a chance to shine and the cast was pretty wonderful: Charles Haid, Christine Belford, Marian Seldes and such guest stars as Michael Anderson Jr., Susan Strasberg, Priscilla Pointer.
I got up early to meet Meara because I remembered her so vividly from her days with husband Jerry Stiller on The Ed Sullivan Show.
"We did 36 of those skits,"she said. "They even wanted to make a sitcom out of the material. Ed was great, he just let us ramble away and the audiences seemed to get our humor."
She'd met Stiller on a date "and when he picked up the check he had me for life. I thought now there's a man!"
The very next year I interviewed Meara again --this time on the set of Rhoda where she had a recurring role as "Sally Gallagher".
"It's not drama but I don't mind getting the laughs. I've been getting them for a very long time."
I kept in intermittent touch --she was great as a co-star on Archie Bunker's Place  (1979-82)playing a warm, sweet character named Veronica Rooney.
Heck, she even co-starred on the sitcom ALF --as Dorothy Halligan in 1987--I saw her on the set and we had a great
When I asked for her favorite part she quickly replied: "The Sunset Gang on PBS's American Playhouse --Jerry was also in it. Great plot, great lines, But nobody has ever heard of it."
When I said I had and loved it she clapped her hands and shouted :"Wheeee!".
reunion.
And then she did the TV rounds as guest star ion Murder, She Wrote (1988), In The Heat Of The Night (1994) ("because Carroll O'Connor asked for me"), Murphy Brown (1994), Will And Grace (2001).
A final burst of activity came as Mary Brady on Sex And The City (2002) and on The King Of Queens (199-2007) opposite husband Jerry Stiller.
I think she would have gotten a great kick out of the headlines that said "Ben Stiller's Mom Dies", too!