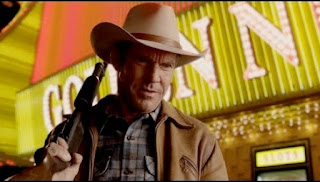 Don't say I didn't warn you! This new TV season has to be about the worst in living memory.
There have been no break outs --most seasons sport at least one big new hit everyone has to see.
And let's admit the World Series and the U.S. presidential debates have both disrupted viewing schedules.
One stat I'm closely watching is the huge increase in viewers using their DVRs to shift when they watch their faves --it can be as high as 30 per cent of a show's total audience which is huge.
But if there are no big hits there have been fewer early cancellations than in recent past seasons.
Some hugely hyped new shows have yet to catch fire. I'm thinking of Vegas on CBS especially but also Nashville which seems to change focus every week.
Cancelled turkeys so far include Made In Jersey (CBS) and Animal Practice (ABC).
That's fewer than expected --I think it's because the fading networks have empty closets whereas they once had a half dozen new shows  waiting in the wings for a time slot.
And there are some winners already. Like Revolution (NBC) which has scored strong enough it has a pick up for an entire series. And it surely helps that NBC desperately needs hits.
I'm not as sure about the long term survivability of Elementary (CBS) which has been drooping a bit since a strong debut. The two leads just don't click. But after some hesitation CBS has ordered a full season pick up.
Guys With Kids (NBC) is one I'm just not sure about. The plot is amiable but there are very few laughs. But NBC says it will hang on a bit longer.
It's strange but NBC's The New Normal has already gotten its pick up for another nine shows and a full season. But its 1.7 rating continues to plummet.
I keep hearing stories ABC may not carry 666 Park Avenue for a full season. Ratings are flat and if you really want to get scared you'll tune to American Horror Story.
But when I talk about the new season I'm also thinking of old shows back for new episodes.
And after nine seasons ABC's Grey's Anatomy is still the leader among viewers 18 to 49. Think about that for a bit.
New comedies are faring poorly and I'm including both Fox's The Mindy Project and Ben And Kate --pre-emptions for baseball have hurt both.
Biggest surprise for me is the huge success of NBC's The Voice which consistently saves NBC from bottom of the ratings status.
Geezer TV is a new name for all those shows that exist because of the devotion of viewers over 50. In this category I can include Dancing With The Stars, The Voice and CBS's latest drama Vegas.
In fact ratings king CBS would be nowhere without its older viewers.