Saturday Night At The Movies: The Axeman Cometh 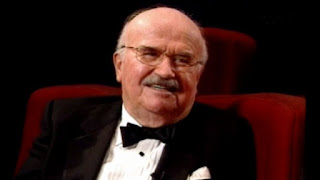 What would Elwy Yost say?
"Gee"? Or "Golly"? Or would Elwy understand?
Because every show on TV gets cancelled. And so cancellation is the fate for Elwy's 40-year old treasure Saturday Night At The Movies.
The move was announced by TVOntario's wobbly management who must move carefully or the whole ramshackle provincial network might get cut sooner than later.
Let's time travel back to 1972 when we lived in a TV universe composed of just 10 basic channels.
And then TVOntario and Citytv broke the mold and we were in a new era of multi-channels.
I had started interviewing Yost in 1971 when he was a prominent member of the fledgling Ontario Educational Authority.
In 1972 TVO found itself stuck with a package of Ingmar Bergman flicks and asked Yost to step in front of the camera to introduce them.
Within weeks Elwy's compendium of old films titled Saturday Night At The Movies was born.
There was a lot of angst at TVO. They were producing all sorts of  deadly serious educational series and along came a show of old movies that consistently topped all others in popularity.
"You've created a monster!" Yost once snapped at me. The stories I was writing for The Hamilton Spectator portrayed him as a slightly befuddled ex-high school teacher whose favorite expression was "Golly".
But it was a different era back then.
The other stations had ditched black and white films and Elwy was able to buy up packages for peanuts.
When Yost began challenging NHL hockey ratings on Saturday evening his competition began buying up packages just to keep him away from them.
But Yost truly revered his celluloid classics. The films ran without commercials and Yost would travel every summer to L.A. to interview the greats and near greats.
When he first met Joseph Cotten he burst into tears sobbing "Kane...Kane" -a reference to his favorite ever film.
On his other show Magic Shadows he'd dress up and strut around, how he loved putting on disguises.
Says Risa Shuman, Yost's long standing producer :"When we ran a film you'd also get the interviews with people who made it.  That's still something nobody else does."
"But to be truthful we never thought we'd last this long. We were always threatened by technology. The viewers stayed with us because we were unique."
I'd argue Saturday Night At The Movies should have closed down with Yost's retirement. But TVO soldiered on with more recent films that simply did not pull in the once vast ratings.
And some of management's decisions were just plain weird. Recently the staff were told "No more Marilyn Monroe flicks" But without Marilyn where would Madonna or Lady Gaga be today?
And let's face it Turner Classic Movies has gradually taken over as the place to watch classic films.
TVO is saying it will cut 40 positions and put more money into its digital operations.
But TVO employees are telling me the network will eventually wither away because of government indifference.
Yost died last year at 85 and I'm glad he did not live to see the shoddy way TVO has treated SNATM.
I was privileged to be part of a crowd that gathered months ago at the Revue Cinema to celebrate his life and thank him for treating classic movies with such reverence.
Who would have thought back in 1972 that an ex-high school teacher would spark a movement that resulted in a four decade run of using old movies as part of the educational process.