Strip The City Is Simply Great 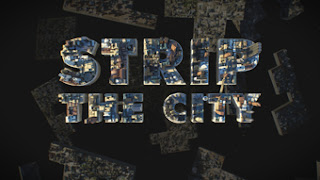 Viewers are always grousing that the expanding Canadian TV universe has created dozens of new cable channels packed with cheaply made Reality TV.
And then along comes something as unique and compelling as Strip The City, financed by Discovery Canada. It's the first TV series I'd ever dare call "inspiring".
The new six-part series from Britain's Windfall Films and Montreal's Handel Productions is absolutely guaranteed to inspire feelings of  wonder in any TV viewer.
You'll quickly become hooked --that's what I'm predicting.
Using state-of-the-art CGI the series literally takes the tops of six major cities of the world to show what makes them livable.
The cities are San Francisco, Toronto, ancient Rome, Dubai, Sydney and London.
I talked on the phone to the London based producer Robert Hartel of Windfall Films who told me it all started when Discovery Canada put up the seed development money "and we went from there.
Our company if you know our history is interested basically in the engineering--we did  the series Big, Bigger, Biggest . Here we wanted to show how world class cities can keep functioning while faced with adversity."
In San Francisco's case it's quite simply the earthquakes --the city is constructed right beside the infamous San Andreas fault line and tremors are part of the daily lives of the inhabitants.
"Dubai was the first city we tackled and we had to show how it has sprouted from sand in just a few decades. There really should not be a city there."
Then there's Sydney "which is built in a region where there are no rivers" --it means underground caverns store the water necessary for the inhabitants to live in such an area.
Ancient Rome offered a different set of challenges --still home to 3 million inhabitants it was once the world's largest city and the construction of such iconic works as the Coliseum and the Via Appia remain wonders of the world.
A Canadian city was needed and Toronto selected although the title of "Ice City" jokes Hartel "may make the people of Edmonton or Alberta laugh." And last year's non-winter certainly was an anomaly.
The first hour episode  which is on San Francisco is compulsively viewable.
The city has been plagued with earthquakes --there is archival footage of the 1906 earthquake which virtually leveled the city. The last major quake in 1989 inflicted major damage as older expressways collapsed on top of cars filled with commuters.
The next big earthquake may come at any time --engineers show us how the fault lines endanger everyone. And we see how modern building techniques are used to ensure buildings move with the tremors rather than buckle --the rebuilding of the bridge to Oakland is one test and another is the construction of the city's first subway system.
You'll surely gasp at the spectacular special effects as skyscrapers appear to pop out of the ground exposing the construction below. One amazing shot shows how the waterfront is built on the shipwrecks of old sailing vessels.
Hartel  says each episode utilizes about 22 of these effects and each one lasts about 45 seconds to a minute.
In one scene of the Golden Gate bridge the water seems to drain away so we can inspect the solid foundations. In terms of time and money the images are sensational and very expensive although Hartel says they cost a fraction of those seen in a $100 million high concept movie.
But it certainly works --now all viewers have to do is wait for an earthquake to test the episode's premises.
The Toronto episode is no less spectacular and H says "I was unfamiliar at the first with how Toronto worked" --but we get right down to the ancient lake bed to show how the tallest buildings are constructed and even go as far as Niagara Falls to see how hydro lines keep downtown Toronto buzzing with heat and lighting.
H says  "getting partners was the hardest part of the process."Toronto based Handel Productions was chosen because "they have the same interests and they understood the Canadian tax breaks system particularly in Quebec."
There were three directors each handling two episodes and each had an associate producer and researcher.
Hartel says "certainly" when asked if he was lucky in not tackling New York --the recent Hurricane Sandy would have made any New York profile immediately dated but the city is certainly  in the running for season two.
"Yes, I feel there will be a second season. We're already thinking about a modern Asian city as one candidate and probably Paris or even Venice."
STRIP THE CITY PREMIERES ON DISCOVERY CANADA SUNDAY NOVEMBER 25 AT 9 P.M.
MY RATING: ****.