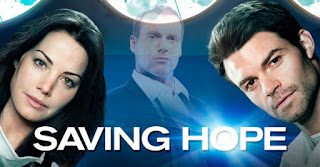 I remember in the summer when CTV launched its medical drama Saving Hope the network promised that whatever the outcome in the U.S. the Canadian series would be back for a second season.
And true to form the sinking NBC network cancelled the low rated medical opus because ratings sucked.
CTV has just announced it is applying artificial resuscitation TV style and will re-float Saving Hope for a second season. And that's just one problem with manufacturing dramas designed to play on both sides of the border.
First of all CTV had to simulcast its Canadian version at the time solely decided by NBC programmers.
For one daffy moment it seemed that Rookie Blue and Saving Hope would be running against each other --both are made by that cagey Canadian veteran producer Ilana Frank.
Then NBC blinked and ran Saving Hope an hour earlier.
The gold rush to make shows that sell to the big U.S. networks seems about over.
NBC bombed out badly with The Firm which was shot in Toronto --NBC had contracted to run 26 episodes the first year but ran off most episodes on Saturday nights where nobody watches.
It all started with CTV's Due South in 1994 which initially ran on both CTV and CBS.
When CBS subsequently bowed out CTV ordered one more run of 26 episodes it could sell in American  syndication and also run the episodes over two seasons on CTV affiliates.
Things didn't go as well for CBC's fine drama show Intelligence (2006-07).
It failed to nab a U.S. sale but creator-producer Chris Haddock subsequently made pilots for both CBS and Fox (and failed both times to sell them).
Other CBC shows did not fare well either: Being Erica ran on the American Soap network which has since been cancelled.
Global's first rate Combat Hospital ran for one summer but ABC declined to pick it up  again and it disappeared.
It was a very expensive show --I visited the sprawling set in Mississauga-- and Global claimed it simply could not afford to make the show on its own.
Another Global series designed fort U.S. sale was  the procedural King which ran for two seasons on Showtime  (2011-12) . Veteran Bernie Zuckerman was the producer--but Global finally gave up, convinced it would get a U.S. sale.
Over at Shaftesbury Films ReGenesis was finally sold into U.S. syndication after three seasons of filming --but the syndication market has been weakening lately. I simply winder how Shaftesbury's other big series Murdoch Mysteries will fare when offered to U.S. stations.
One idea: it would make a perfect buy for PBS stations --just like British TV's currently running MI5.
CTV soldiered on with more seasons of The Listener which was quickly dropped in the U.S. When it builds up enough episodes it might yet garner a syndication deal.
I happen to think it better than CBS's similar show The Mentalist.
Trying to make that all important U.S. sale has always preoccupied Canadian producers.
Way back in 1972 I covered the premiere of CBC's miniseries  Jalna at the St. Lawrence Centre. It was a star studded (for Canada) event but the audience grew listless and I spotted producer Fletcher Markle and star Kate Reid downing martinis at the bar.
CBC tried to peddle Jalna to PBS. Masterpiece Theatre's  veteran producer Joan Wilson told me of her excruciating pain in having to sit in a darkened screening room next to Markle and wondering "when the thing would end".
All these decades later Canadian producers still haven't learned the lessons of Jalna: Make Canadian shows for Canadians.
And the best ones will always find audiences abroad.